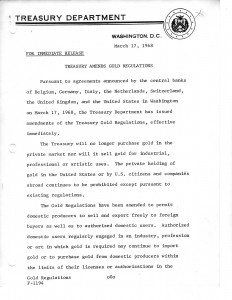 Pursuant to agreements announced by the central banks of Belgium, Germany, Italy, the Netherlands, Switzerland, the United Kingdom, and the United States in Washington on March 17, 1968, the Treasury Department has issued amendments of the Treasury Gold Regulations, effective immediately.

The Treasury will no longer purchase gold in the private market nor will it sell gold for industrial, professional or artistic uses. The private holding of gold in the United States or by U.S. citizens and companies abroad continues to be prohibited except pursuant to existing regulations.