FOR RELEASE MORNING NEWSPAPERS
TUESDAY, MAY 14, 1968 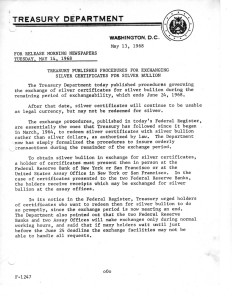 The Treasury Department today published procedures governing the exchange of silver certificates for silver bullion during the remaining period of exchangeability, which ends June 24, 1968.

After that date, silver certificates will continue to be usable as legal currency, but may not be redeemed for silver.

The exchange procedures, published in today’s Federal Register, are essentially the ones that Treasury has followed since it began in March, 1964, to redeem silver certificates with silver bullion rather than silver dollars, as authorized by law. The Department now has simply formalized the procedures to insure orderly transactions during the remainder of the exchange period.

In its notice in the Federal Register, Treasury urged holders of certificates who want to redeem them for silver bullion to do so promptly, since the exchange period is now nearing an end. The Department also pointed out that the two Federal Reserve Banks and two Assay Offices will make exchanges only during normal working hours, and said that if many holders wait until just before the June 24 deadline the exchange facilities may not be able to handle all requests.