Trial Strike of the Eisenhower Dollar 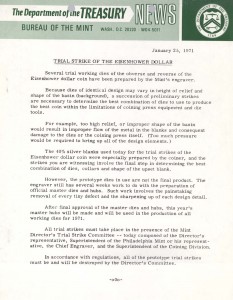 Several trial working dies of the obverse and reverse of the Eisenhower dollar coin have been prepared by the Mint’s engraver.

Because dies of identical design may vary in height of relief and shape of the basin (background), a succession of preliminary strikes are necessary to determine the best combination of dies to use to produce the best coin within the limitations of coining press equipment and die tools.

For example, too high relief or improper shape of the basin would result in improper flow of the metal in the blanks and consequent damage to the dies or the coining press itself. (Too much pressure would be required to bring up all of the design elements.)

The 40% silver blanks used today for the trial strike of the Eisenhower dollar coin were especially prepared by the coiner, and the strikes you are witnessing involve the final step in determining the best combination of dies, collars and shape of the upset blank.

However, the prototype dies in use are not the final product. The engraver still has several weeks work to do with the preparation of official master dies and hubs. Such work involves the painstaking removal of every tiny defect and the sharpening up of each design detail.

After final approval of the master dies and hubs, this year’s master hubs will be made and will be used in the production of all working dies for 1971.

In accordance with regulations, all of the prototype trial strikes must be and will be destroyed by the Director’s Committee.