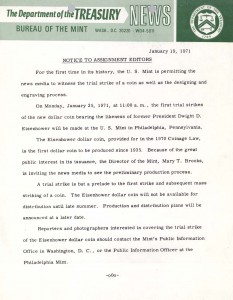 For the first time in its history, the U.S. Mint is permitting the news media to witness the trial strike of a coin as well as the designing and engraving process.

On Monday, January 25, 1971, at 11:00 a.m., the first trial strikes of the new dollar coin bearing the likeness of former President Dwight D. Eisenhower will be made at the U.S. Mint in Philadelphia, Pennsylvania.

The Eisenhower dollar coin, provided for in the 1970 Coinage Law, is the first dollar coin to be produced since 1935. Because of the great public interest in its issuance, the Director of the Mint, Mary T. Brooks, is inviting the news media to see the preliminary production process.

A trial strike is but a prelude to the first strike and subsequent mass striking of a coin. The Eisenhower dollar coin will not be available for distribution until late summer. Production and distribution plans will be announced at a later date.