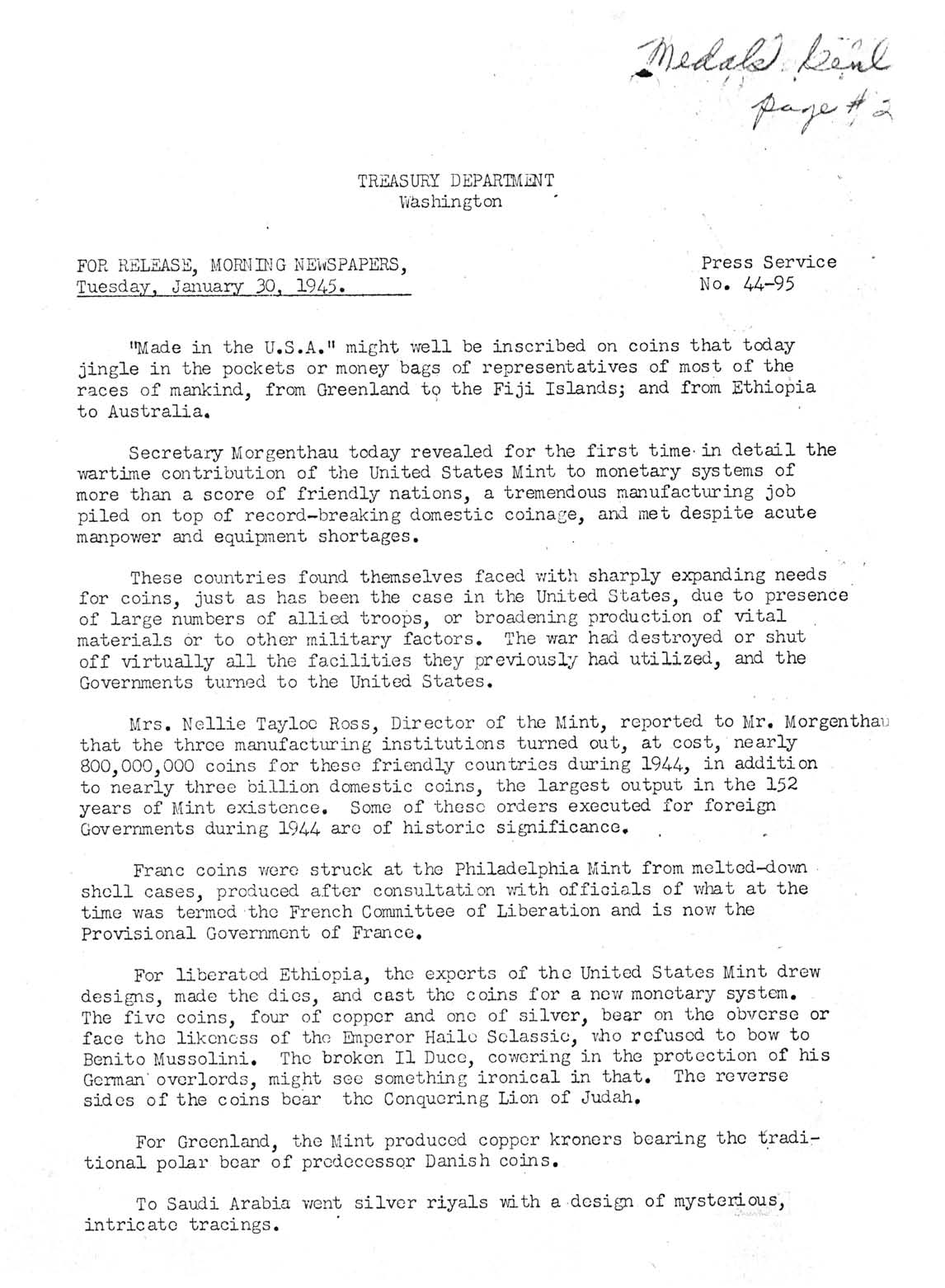 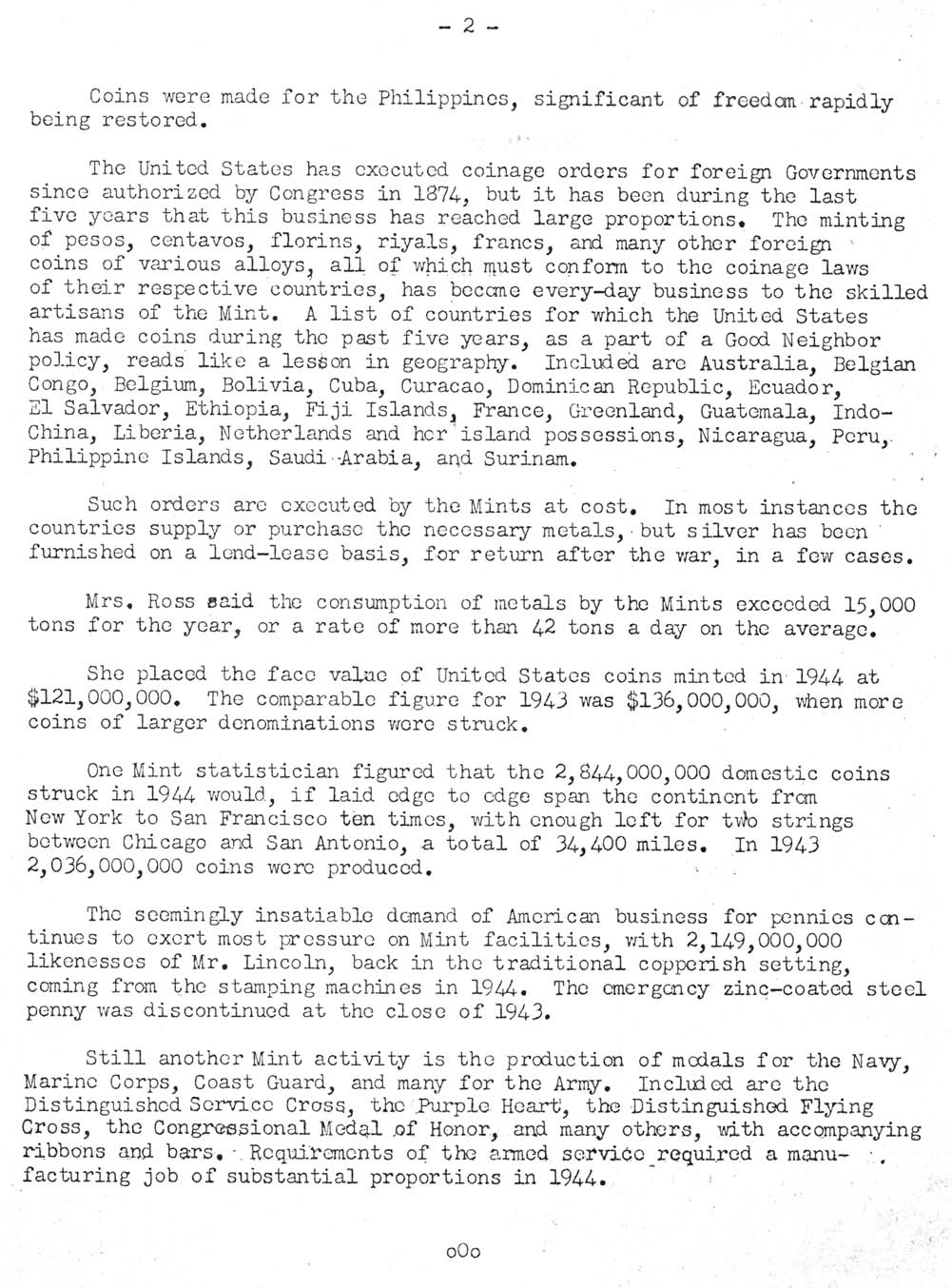 “Made in the U.S.A.” might well be inscribed on coins that today jingle in the pockets or money bags of representatives of most of the races of mankind, from Greenland to the Fiji Islands; and from Ethiopia to Australia.

Secretary Morgenthau today revealed for the first time in detail the wartime contribution of the United States to monetary systems of more than a score of friendly nations, a tremendous manufacturing job piled on top of record-breaking domestic coinage, and met despite acute manpower and equipment shortages.

These countries found themselves faced with sharply expanding needs for coins, just as has been the case in the United States, due to presence of large numbers of allied troops, or broadening production of vital materials or to other military factors. The war had destroyed or shut off virtually all the facilities they previously had utilized, and the Governments turned to the United States.

Mrs. Nellie Tayloe Ross, Director of the Mint, reported to Mr. Morgenthau that the three manufacturing institutions turned out, at cost, nearly 800,000,000 coins for these friendly countries during 1944, in addition to nearly three billion domestic coins, the largest output in the 152 years of Mint existence. Some of these orders executed for foreign Governments during 1944 are of historic significance.

Franc coins were struck at the Philadelphia Mint from melted-down shell cases, produced after consultation with officials of what at the time was termed the French Committee of Liberation and is now the Provisional Government of France.

For liberated Ethiopia, the experts of the United States Mint drew designs, made the dies, and cast the coins for a new monetary system. The five coins, four of copper and one of silver, bear on the obverse or face the likeness of the Emperor Haile Selassie, who refused to bow to Benito Mussolini. The broken Il Duce, cowering in the protection of his German overloads, might see something ironical in that. The reverse sides of the coins bear the Conquering Lion of Judah.

To Saudi Arabia went silver riyals with a design of mysterious, intricate tracings.

Coins were made for the Philippines, significant of freedom rapidly being restored.

The United States has executed coinage orders for foreign Governments since authorized by Congress in 1874, but it has been during the last five years that this business has reached large proportions. The minting of pesos, centavos, florins, riyals, francs, and many other foreign coins of various alloys, all of which must conform to the coinage laws of their respective countries, has become every-day business to the skilled artisans of the Mint. A list of countries for which the United States has made coins during the past five years, as a part of a Good Neighbor policy, reads like a lesson in geography. Included are Australia, Belgian Congo, Belgium, Bolivia, Cuba, Curacao, Dominican Republic, Ecuador, El Salvador, Ethiopia, Fiji Islands, France, Greenland, Guatemala, Indo-China, Liberia, Netherlands and her island possessions, Nicaragua, Peru, Philippine Islands, Saudi Arabia, and Surinam.

Such orders are executed by the Mint at cost. In most instances the countries supply or purchase the necessary metals, but silver has been furnished on a lend-lease basis, for return after the war, in a few cases.

Mrs. Ross said the consumption of metals by the Mints exceeded 15,000 tons for the year, or a rate of more than 42 tons a day on the average.

The seemingly insatiable demand of American business for pennies continues to exert most pressure on Mint facilities, with 2,149,000,000 likenesses of Mr. Lincoln, back in the traditional copperish setting, coming from the stamping machines in 1944. The emergency zinc-coated steel penny was discontinued at the close of 1943.

Still another Mint activity is the production of medals for the Navy, Marine Corps, Coast Guard, and many for the Army. Included are the Distinguished Service Cross, the Purple Heart, the Distinguished Flying Cross, the Congressional Medal of Honor, and many others, with accompanying ribbons and bars. Requirements of the armed service required a manufacturing job of substantial proportions in 1944.