Woman Money-Making Champ of the Year 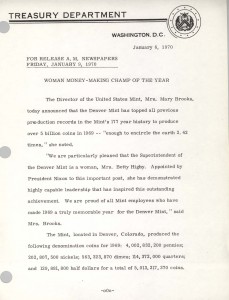 The Director of the United States Mint, Mrs. Mary Brooks, today announced that the Denver Mint has topped all previous production records in the Mint’s 177 year history to produce over 5 billion coins in 1969 — “enough to encircle the earth 2.42 times,” she noted.

“We are particularly pleased that the Superintendent of the Denver Mint is a woman, Mrs. Betty Higby. Appointed by President Nixon to this important post, she has demonstrated highly capable leadership that has inspired this outstanding achievement. We are proud of all Mint employees who have made 1969 a truly memorable year for the Denver Mint,” said Mrs. Brooks.