150 Years of Connecting East and West by Rail and Numismatics 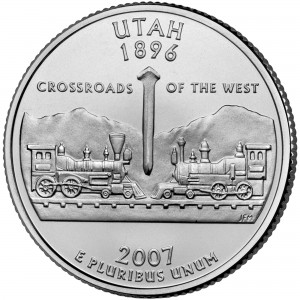 May 10, 2019, marks the 150th anniversary of an iconic, historic event in American history—the completion of the transcontinental railroad. This 19th century engineering triumph would redefine the nation, connecting the east coast to the west coast by rail. Additionally, it would enable the United States Mint to conduct business in new ways and inspire artists and numismatists alike.

At the time of its inception and petition to Congress in 1845 by Asa Whitney, known as the “Father of Pacific Railroads,” Americans living east of the Missouri river were not able to access the West Coast, and thus the flourishing gold rush, by rail. Instead, the route required slow and tedious travel by wagon, subjecting people and goods to various hazards along the way.

While Congress did not support Whitney’s idea, it drew the public’s attention to the need of more efficient cross-county travel. Others, including U.S. government surveyors and the Army Corps of Topographical Engineers became involved in the search for the perfect rail path from east to west. Ultimately, Theodore Judah, would find that ideal route and create the Central Pacific Railroad Company (with the help of investors). The proposed railway would connect Nebraska to California by way of Utah.

On July 1, 1862, President Abraham Lincoln signed the Pacific Railway Act. The eastward-traveling Central Pacific Railroad and the westward-traveling Union Pacific Railroad would meet up somewhere in the middle, however the location was not identified in the legislation. This would create conflict between the two companies and even resulted in parallel tracks being laid in some places. Congress stepped in and on April 9, 1869, named Promontory Summit as the connecting point of the two railways.

The railroad would take six years to complete. On May 10, 1869, the lines joined in a triumphant celebration at Promontory Summit. U.S. Mint commemorated the completion of the transcontinental railroad with the Pacific Railroad medal. The artistry is the work of engraver William Barber, who created the dies for both the obverse and reverse.

One hundred years later, as part of the 1969 Golden Spike Centennial Celebration, the U.S. Mint manufactured and issued the Transcontinental Railroad Anniversary Medal. This is the second medal by the U.S. Mint to honor the completion of this life-changing event in American history. The phrase, “The Oceans United by Railway,” was used on the obverses of this medal and its 1869 predecessor. The design on the 1969 medal’s reverse would be similar to the one used in 2007 on the reverse of the Utah State Quarter.

Today, while the transcontinental railroad is no longer in operation, one can enjoy its legacy at Golden Spike National Historical Park in Utah, or through the U.S Mint’s numismatic renderings pictured here. 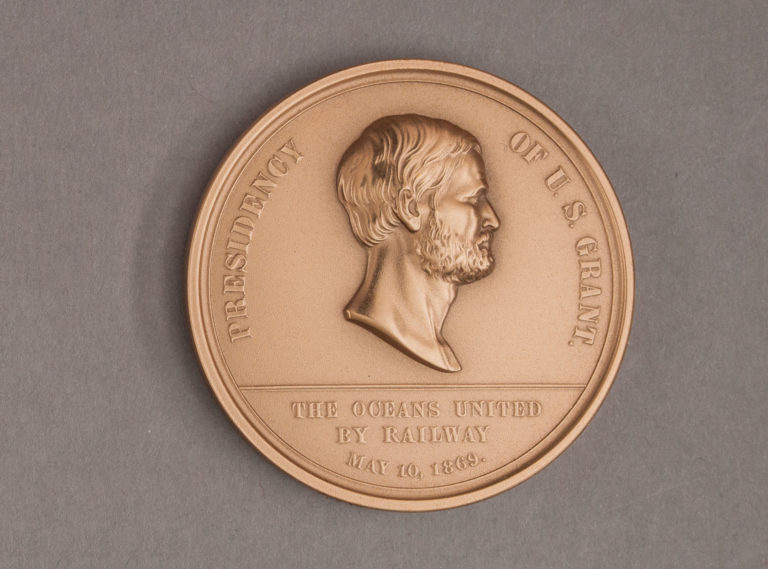 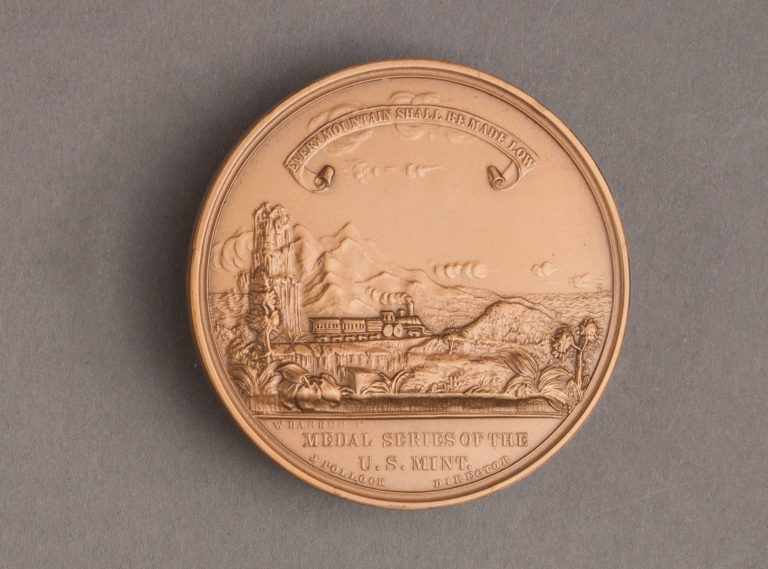 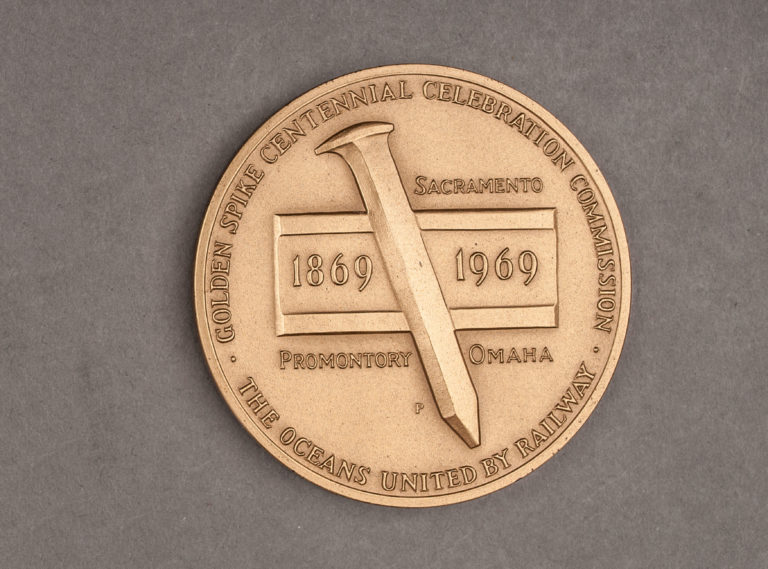 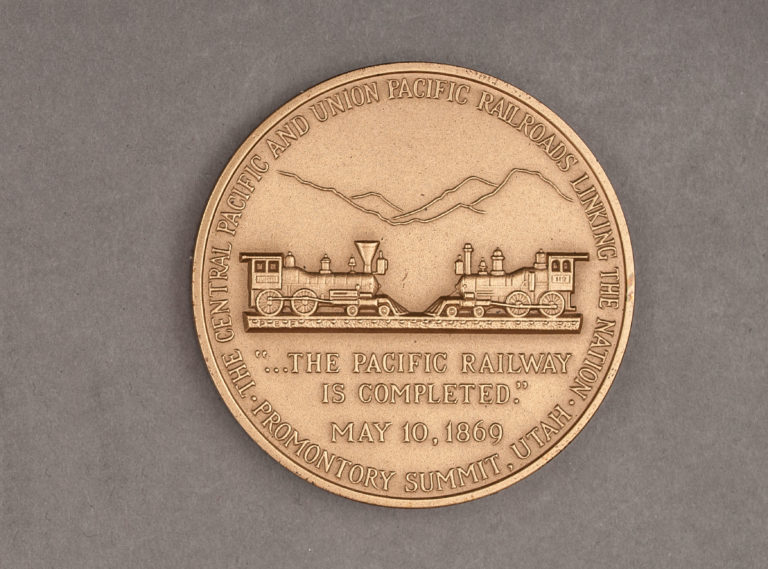 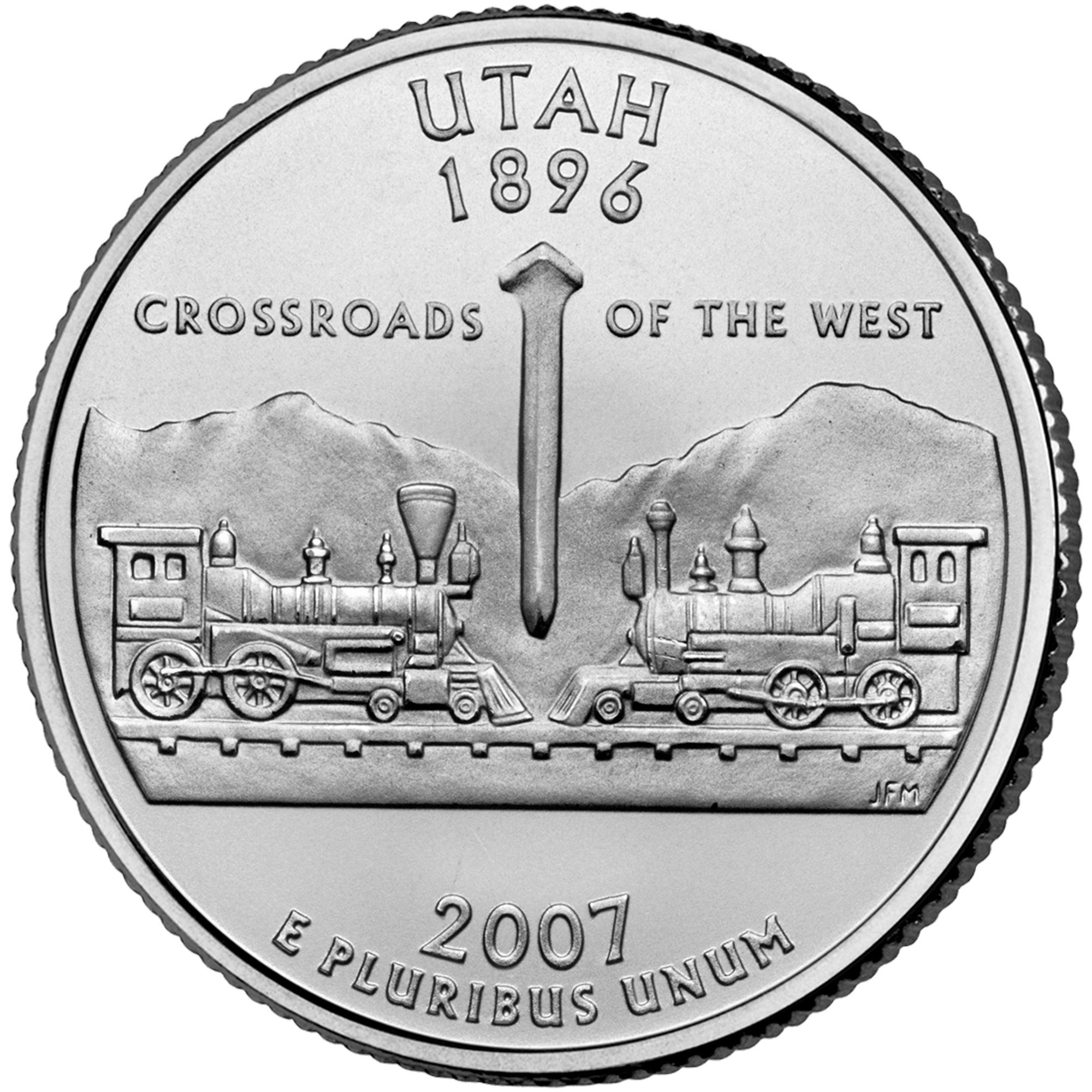 A special thanks to the U.S. Mint Office of the Historian. Images courtesy of the Heritage Assets Collection. Information about the transcontinental railroad was accessed at https://spike150.org.