A Congressional Gold Medal, designed and struck by the Mint, was awarded collectively on December 10, 2014, to the World War II members of the Civil Air Patrol (CAP) during a ceremony in Emancipation Hall in the U.S. Capitol Visitor Center. The medal recognizes the organization for its members’ humanitarian, combat, and national services during a critical time for our nation.

The CAP began operations under the Office of Civilian Defense on Dec. 1, 1941, one week before the U.S. entered World War II. Within a few months, the unpaid volunteers became involved in military operations by assisting the U.S. Army and the U.S. Navy. Using privately owned aircraft and personal funding, the CAP members performed numerous essential tasks in support of the military and the nation, including armed convoy and antisubmarine patrols off the Atlantic and Gulf coasts.

Democratic Leader Nancy Pelosi spoke of the volunteers’ numerous sacrifices. “Many of you and others who were with you then left jobs and shuttered businesses; they traveled to ramshackle airbases and slept in converted chicken coops — they tell me; they worked without pay or for a bare-bones per diem each day — just to risk your lives and climb into small civilian aircraft to scan the waves for ships, survivors and submarines…By the end of the war, the civilian men and women of the Civil Air Patrol had flown 750,000 hours of missions. 65 volunteers had given their lives on active duty. ‘Semper Vigilans’ cries the motto of the Civil Air Patrol. Then as now, ‘always vigilant,’ ever ready to rush to the rescue for our country.”

Prior to the presentation of the medal, House Speaker John Boehner remarked, “Listening to these stories, it is easy to forget that these were just private citizens who wanted to lend a hand. They also lent their planes, their two-way radios, even their own spare parts. They had no salary, only a stipend that came in such fits and starts that they nearly lost their housing.

It’s easy to forget, and some day, someone skimming the manifest of Gold Medals may ask, ‘just who were these men and women?’ But really, who weren’t they? They were clerks, bus drivers, doctors, mechanics, salesmen, and plumbers. They came from more than 1,000 cities and whistle stops. They flew with the unbounded determination of America. And so: for the World War II members of the Civil Air Patrol, the United States Mint has a struck a Congressional Gold Medal, which we present now with full hearts and no small amount of wonder.”

The Congressional Gold Medal’s obverse, designed by Artistic Infusion Program designer Donna Weaver and sculpted by Mint Sculptor-Engraver Don Everhart, features two CAP volunteers — one male and one female — watching the skies. In the background, a tanker is escorted by CAP planes overhead.

One of the most touching points of the ceremony and the Civil Air Patrol Congressional Gold Medal dinner was the attendees’ reaction to the medal designs. “We were tremendously moved to see how much the medals meant to these amazing men and women. One veteran didn’t seem take her eyes off the medal once it was presented to her; she turned it over again and again to inspect the details of the design. And while several folks thanked us for the work performed by the Mint, we could only feel that it is we that are privileged to have played a part in recognizing these heroes in our recent history,” said April Stafford, Director, Office of Design Management.

A recording of the Congressional Gold Medal ceremony can be viewed on Speaker Boehner’s website. 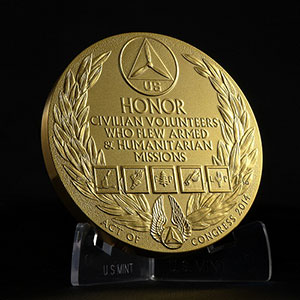 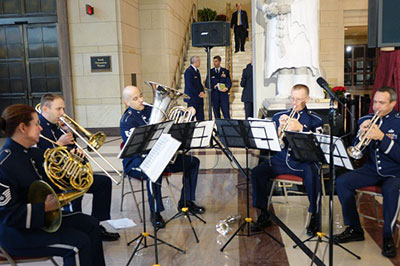