WASHINGTON – Members of the Doolittle Tokyo Raiders were awarded the Congressional Gold Medal collectively during a ceremony on April 15 in Emancipation Hall in the U.S. Capitol Visitor Center.

The medal was awarded to the volunteers of the 17th Bombardment Group, led by Lt. Col. James Doolittle during World War II, who made the first strike against Japan on April 18, 1942. The top-secret mission called for the raiders to take off from an aircraft carrier approximately 450 miles outside of Japan, bomb select Japanese targets, and then fly to safety in unoccupied areas of China. The operation was risky, as medium bombers had never before flown from a carrier, and sailing so far into enemy territory was dangerous.

Taking off from the deck of the USS Hornet (CV-8) in 16 B-25s, the five-member crews successfully completed the first leg of their mission, bombing oil storage facilities, factory areas, and military installations. Dwindling fuel supplies, however, prevented the crews from reaching the designated friendly airfields, forcing them to ditch their aircrafts at sea, bail out, or crash-land in China. One crew flew to the Soviet Union, where its members were held as prisoners until they escaped 13 months later. Thanks to the heroic efforts of the Chinese, most of the Doolittle Raiders evaded capture.

“The Doolittle Raiders came from a generation that spoke proudly of service to our country but rarely drew attention to their own courage. They sought no recognition but, oh, how they earned it,” U.S. Sen. Sherrod Brown, D-Ohio, said as part of the ceremony. Rep. Pete Olson, R-Texas, said “This gold medal ensures we will never forget these heroes who saved our world from tyranny.”

In preparing designs for consideration, United States Mint Artistic Infusion Program (AIP) artist Chris Costello referenced photographs, made sketches and even built scale models to photograph with dramatic points of view. Commenting on the process of creating the design, Costello said “It’s always challenging to take an idea or narrative and reproduce visually in the limited space of a medal or coin.”

Public Law 113-106, which requires the United States Mint to strike the Congressional Gold Medal for the Doolittle Tokyo Raiders, also authorizes the bureau to strike and sell bronze reproductions of the medal. The three-inch medal (product code 15MA) will be priced at $39.95 and the 1.5-inch medal (product code 15MB) will be priced at $6.95. Orders will be accepted starting April 16, 2015, at noon Eastern Daylight Time via the bureau’s online catalog and at 1-800-USA-MINT (872-6468). Hearing– and speech-impaired customers with TTY equipment may call 1-888-321-MINT (6468). 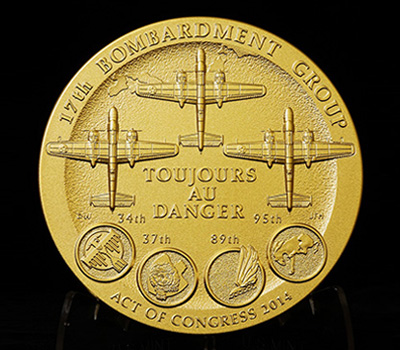 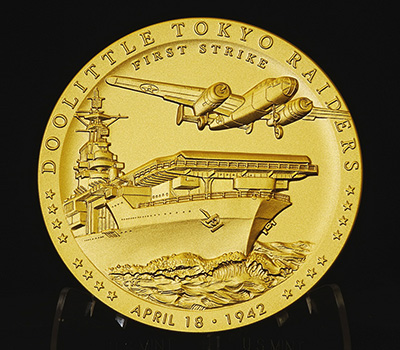