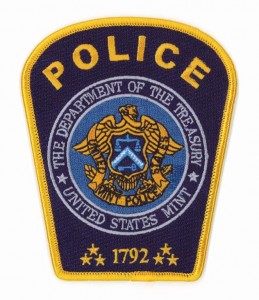 Every year, the United States Mint Police safeguard more than 1,650 Mint employees, more than $100 billion in gold, silver and coinage, and thousands of visitors to Mint facilities.

Established in 1792, the United States Mint Police is one of the oldest federal law enforcement agencies in the nation. Responsible for establishing the standard “As Secure as Fort Knox,” our officers continue to meet that standard every day. The Mint Police are responsible for protecting more than $100 billion in Treasury and other government assets stored in facilities located at Philadelphia, Pa.; San Francisco, Calif.; West Point, N.Y.; Denver, Colo.; Fort Knox, Ky.; and our headquarters in Washington, D.C.

Like any other police force, the United States Mint Police has officers, detectives, and supervisory staff. Mint Police Officers are hired through the same system as other government employees, but then go through three months of training at the Federal Law Enforcement Training Center (FLETC) in Glynco, Ga. An interagency law enforcement training body for 91 United States government federal law enforcement agencies, FLETC has a training audience that also includes state, local, and tribal departments throughout the United States.

After completing this initial training, new officers report to their Mint location where they undergo five weeks of specialized training. U.S. Mint Police Officers also maintain a strict training schedule throughout their careers.

Recently, the federal government jobs blog site, FederalJobs.net posted an interview with Connie Rupp, stationed at our Denver facility, about what it’s like to be a U.S. Mint Police Officer.

San Francisco Field Chief John Abbey sums up the experience and effectiveness of the Mint Police.  “The officers here . . . the way they work together and the way they take their jobs so seriously . . . the professionalism here is unmatched.”

Learn more about the U.S. Mint Police and their training by watching this video.