Nothing ‘Loonie’ About It — Voyageurs National Park Quarter is Launched! 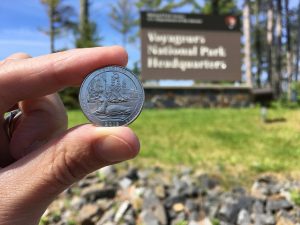 There was a unique sound emanating from Minnesota’s only national park on June 14, and for once, it was not the haunting call of the loons. Instead, it was the sound of quarters clanking and audience members applauding! The Voyageurs National Park Quarter, the 43rd coin in the America the Beautiful Quarters® Program, made its debut June 14 at the Irv Anderson Amphitheater, in International Falls, Minn. Coincidentally, the 43rd quarter was released on the 43rd anniversary of the founding of Voyageurs National Park.

David J. Ryder, Director, United States Mint, and Bob DeGross, Superintendent, Voyageurs National Park, along with Leland Grim – who served as the event’s emcee – spoke to a crowd of 600, including 100 school children, about the history and significance of the U.S. Mint and Voyageurs National Park. Activities encompassing the ceremonial release of the Voyageurs quarter marked Ryder’s first public appearance and first coin forum/quarter launch event since being re-appointed as the Mint’s director this past April.

Millions of Americans will see this new quarter, and as a result, many will want to “voyage” to Minnesota to experience the distinctive beauty of its land, lakes and wildlife. Just as the loon’s yodels and wails are a distinctive and timeless sound of Northern Minnesota’s wilderness and waterways, the Voyageurs Quarter will echo the histories and cultures of the people that have been connected here through trade, industry and recreation.

Regional and local officials and talent contributed to the event as well. Minnesota Senators Amy Klobuchar and Tina Smith, along with Congressman Rick Nolan sent letters to be read at the event. Darcy Sullivan, local folk music singer, provided pre-ceremony music. The color guard from VFW post #2948 and scouting troops presented the colors, while Gavia Yount, a local student sang the National Anthem. Yount was selected not only for her mellifluous voice, but also for her first name, which means loon in Latin.

Following the event, a coin exchange took place, thanks to TruStar Federal Credit Union—1,700 rolls were exchanged, totaling $17,000. The staff from Voyageurs National Park offered an array of post-event activities, highlighting the quarter, the park and Flag Day.

The night prior to the event, questions about the U.S. Mint’s newest quarter, and the history of the Voyageurs National Park were asked and answered at the Coin Forum. It was held at the Kabetogama Lake Town Hall; 44 people attended the discussion.

This is the second quarter featuring a loon on the coin’s reverse, manufactured by the U.S. Mint. The previous coin was the 2005 Minnesota State Quarter.