As countries around the world prepare to celebrate the United Nations’ sponsored World Space Week from October 4-10, the Mint reflects on its long connection to the space program.

Some notable United States Mint products in this area include:

In addition to these coins and medals, two quarters from the 50 State Quarters Program have been traveling aboard the New Horizons spacecraft since 2006 and are currently 520 million kilometers past Pluto in the Kuiper Belt.

The Maryland and Florida quarters were chosen to honor the states that designed and launched the spacecraft, and they have acted as spin balance weights during the trip.

Illustrator Ralph Butler created the Florida design in a single sitting and entered it into the U.S. Mint’s competition at the encouragement of his mother. He added the tagline “Gateway to Discovery” out of respect for Florida’s long history of exploration.

“I wish my parents were still alive to see this,” said Florida-native Butler during an interview with the Mint in 2015. “Every artist dreams of a moment of immortality, where your art will live on for your children and grandchildren…. To know that the Florida quarter is out there in space is wonderful. I guess it always pays to listen to your mother!”

William Krawczewicz, who designed the Maryland quarter for the U.S. Mint, said he is honored to know his imagery is traveling the far reaches of space.

“It’s unheard of,” said Krawczewicz, who now works as a banknote designer for the Bureau of Engraving and Printing. “It’s really amazing that something that I helped to work on has been included in a U.S. space flight mission and is three billion miles away right now…. The whole mission itself shows what the American journey is all about… living, exploring, and discovering new frontiers.”

The U.S. Mint produced over 1.2 billion Maryland quarters and over 480 million Florida quarters between its Denver and Philadelphia facilities. Maryland was the seventh quarter to be made, signifying its entrance as the seventh state in the Union, while Florida was 27th in production. Release dates were 2000 and 2004, respectively.

Lou Vannicola, a distribution management specialist at the U.S. Mint in Philadelphia, remembers the atmosphere when the Maryland quarter was produced.

“It was the busiest time ever here in Philadelphia,” Vannicola recalled, “but it was a fun and exciting time, too.”

Vannicola said he was amazed to learn that two state quarters had reached the edge of our solar system.

“That program and those coins started right here and now look where they are,” said Vannicola. “Luckily, I didn’t have to schedule that shipment…. It’s the perfect exclamation point to that program!”

While the voyage of the state quarters to the distant Kuiper Belt represents the latest story in the love affair between coins and space, there may be a new chapter to be written.

Currently, the U.S. Congress is considering proposals in both the House and Senate for the Apollo 11 50th Anniversary Commemorative Coin Act, which would honor the 50th anniversary of the moon landing in 2019. 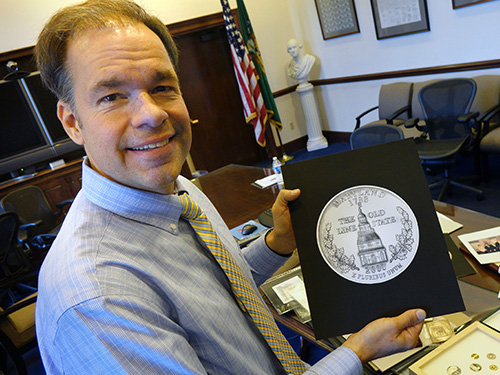