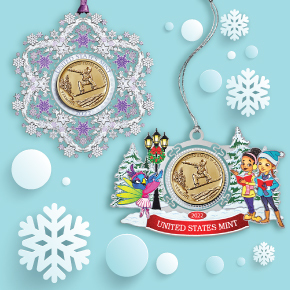 Crafted in solid brass and imitation rhodium, both ornaments feature an uncirculated 2022 American Innovation® $1 Coin honoring innovations of Vermont, featuring an image of a young snowboarder in action, with inscriptions “UNITED STATES OF AMERICA” and “VERMONT.” The obverse (heads) of the coins are not visible. Additional details are below.

Mighty Minters™ Ornament
Now in its fourth year, the 2022 Mighty Minters ornament theme is “Sing Songs of Joy” and highlights Mighty Minters Layla, a peahen, and Lina and Kendra, the Mint’s coin-collecting ambassadors, who are out spreading holiday joy. The coin is in the center of Layla, Lina, and Kendra, and lit by a neighborhood streetlight with new-fallen snow.

Priced at $27.95, this delightful ornament is perfect for gift-giving and will appeal to children and adults alike. The United States Mint Seal is engraved on the back of the ornament, along with “Made in the U.S.A.” and “©2022 U.S. Mint.” A silver-colored cord is attached.

2022 United States Mint Ornament
The 2022 United States Mint Holiday Ornament, the fourth of this series, is shaped like a snowflake, with flakes of white blue and purple, resembling the colors reflecting off icy crystals caught by sunlight. A light blue ring of smaller flakes encircles the coin, with “UNITED STATES MINT” and “2022” along the border.

An engraved version of the United States Mint Seal is on the back of the ornament, along with “MADE IN THE U.S.A.” and “©2022 U.S. Mint.” This one-of-a-kind ornament is suspended from a purple ribbon and is priced at $29.95.

To set up “Remind Me” alerts, please visit:

The Mint’s Holiday Ornaments are also included in the Subscription Program. Structured like a magazine subscription, this program affords customers the convenience of signing up to receive automatic shipments of products in a series. The shipments continue until the subscription is cancelled. For details, visit Subscriptions – US Mint Catalog Online.