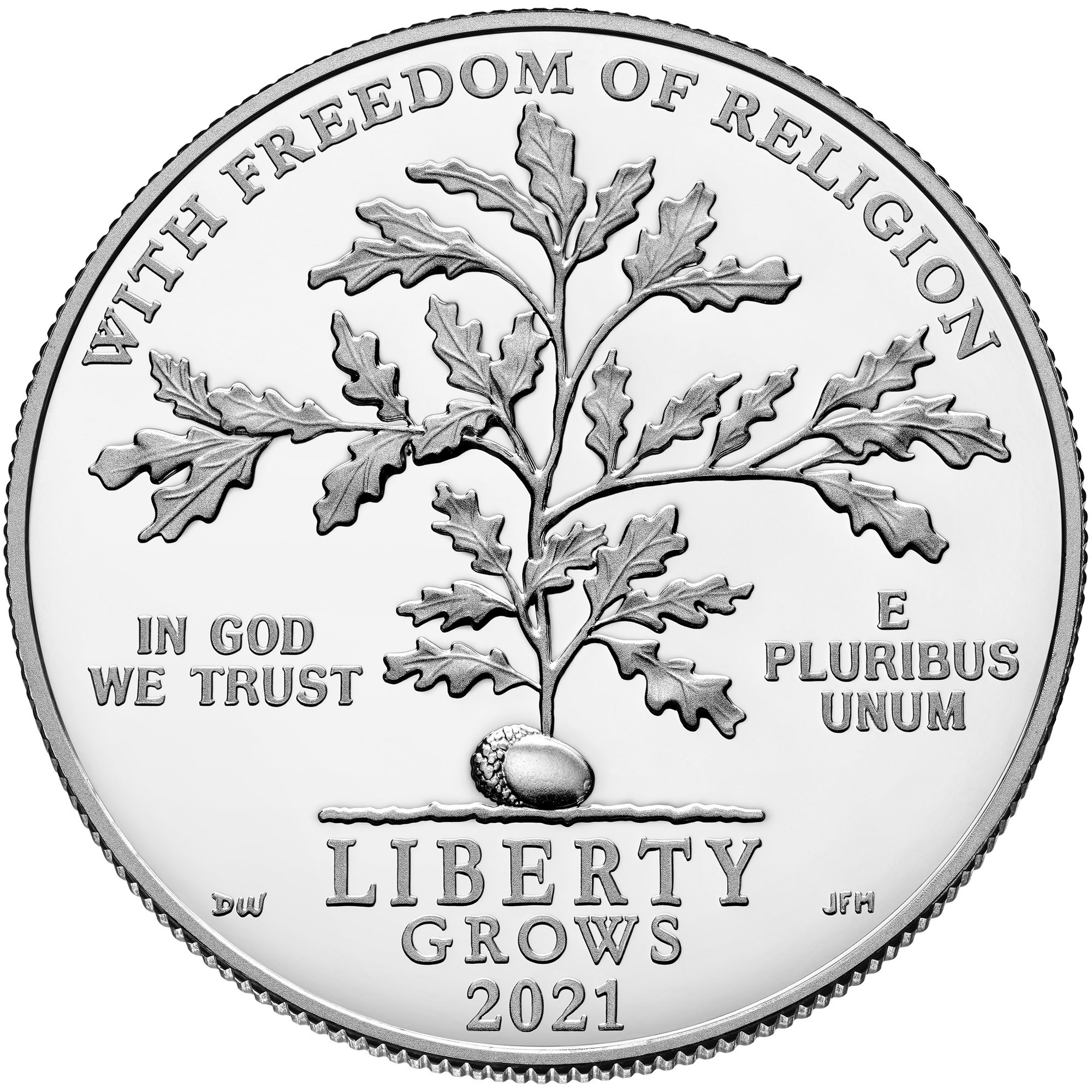 WASHINGTON – The United States Mint (Mint) announced today that it is launching a new five-year Platinum Proof Coin Program series starting in 2021 and continuing through 2025. This new five-year series is part of the program legislated by the 104th Congress in 1996. The new series features all new obverse (heads) designs, as well as a new common reverse (tails) design on a one ounce, 99.95 percent platinum proof coin each year. The designs are available here.

The First Amendment to the United States Constitution Platinum Proof Coin Program will reflect the five freedoms enumerated in the First Amendment to the United States Constitution—that is: “Congress shall make no law respecting an establishment of religion, or prohibiting the free exercise thereof; or abridging the freedom of speech, or of the press; or the right of the people peaceably to assemble, and to petition the Government for a redress of grievances.”

This series uses the lifecycle of the oak tree from seedling to a mighty oak as a metaphor for our country’s growth as a nation that values freedom. Liberty grows to a thing of strength and beauty from a seed—our Bill of Rights. Each of the freedoms enumerated in the First Amendment contributes to the growth and development of the Nation.

All obverse designs in this series were created by Artistic Infusion Program (AIP) Designer Donna Weaver, and engraved by Chief Engraver Joseph Menna.

The 2021 obverse design depicts a seedling and an acorn surrounded by the inscription “WITH FREEDOM OF RELIGION LIBERTY GROWS.”

The 2022 obverse design features a juvenile oak tree framed with the inscription “WITH FREEDOM OF SPEECH LIBERTY BLOSSOMS.”

The 2023 obverse design portrays the branch of mature oak tree with acorns amid the inscription “WITH FREEDOM OF THE PRESS LIBERTY BEARS FRUIT.”

The 2024 obverse design showcases several types of oak leaves assembled between the inscription “WITH THE RIGHT TO ASSEMBLE LIBERTY SPREADS.”

The 2025 and final obverse design of this series features a mature spreading, impressive oak tree between the inscription “WITH THE RIGHT TO PETITION LIBERTY ENDURES.” The oak, known for its strength, can live up to 200 years and is a symbol of endurance.

Additional obverse coin inscriptions are “IN GOD WE TRUST,” “E PLURIBUS UNUM,” and the year the coin is issued.

The common reverse design for this series, by AIP Designer Patricia Lucas-Morris, depicts an eagle in flight, an olive branch in its talons. Inscriptions are “UNITED STATES OF AMERICA,” “$100,” “1 OZ.,” and “.9995 PLATINUM.” The reverse engraver is former Medallic Artist Don Everhart.

The first coin in the series, the 2021 First Amendment to the United States Constitution Platinum Proof Coin – Freedom of Religion, goes on sale on February 4, 2021.

Each coin is encapsulated and inserted in a black presentation box. An image of the obverse design is incorporated on the outer packaging sleeve and on the Certificate of Authenticity.

As with all Mint products containing a precious metal, this coin will be priced according to the range in which it appears on the Pricing of Numismatic Gold, Commemorative Gold, and Platinum and Palladium Products table. Current pricing information is available online at https://catalog.usmint.gov/on/demandware.static/-/Sites-usm-site-catalog-us/default/dwb6488dac/images/PDFs/2020-Pricing-Grid-v3.pdf.

To sign up for Remind Me alerts for the 2021 First Amendment to the United States Constitution Platinum Proof Coin – Freedom of Religion, visit: https://catalog.usmint.gov/first-amendment-to-the-united-states-constitution-2021-platinum-proof-coin—freedom-of-religion-21EJ.html (product code 21EJ).

About the United States Mint
Congress created the United States Mint in 1792, and the Mint became part of the Department of the Treasury in 1873. As the Nation’s sole manufacturer of legal tender coinage, the Mint is responsible for producing circulating coinage for the Nation to conduct its trade and commerce. The Mint also produces numismatic products, including proof, uncirculated, and commemorative coins; Congressional Gold Medals; silver and bronze medals, and silver and gold bullion coins. Its numismatic programs are self-sustaining and operate at no cost to taxpayers.