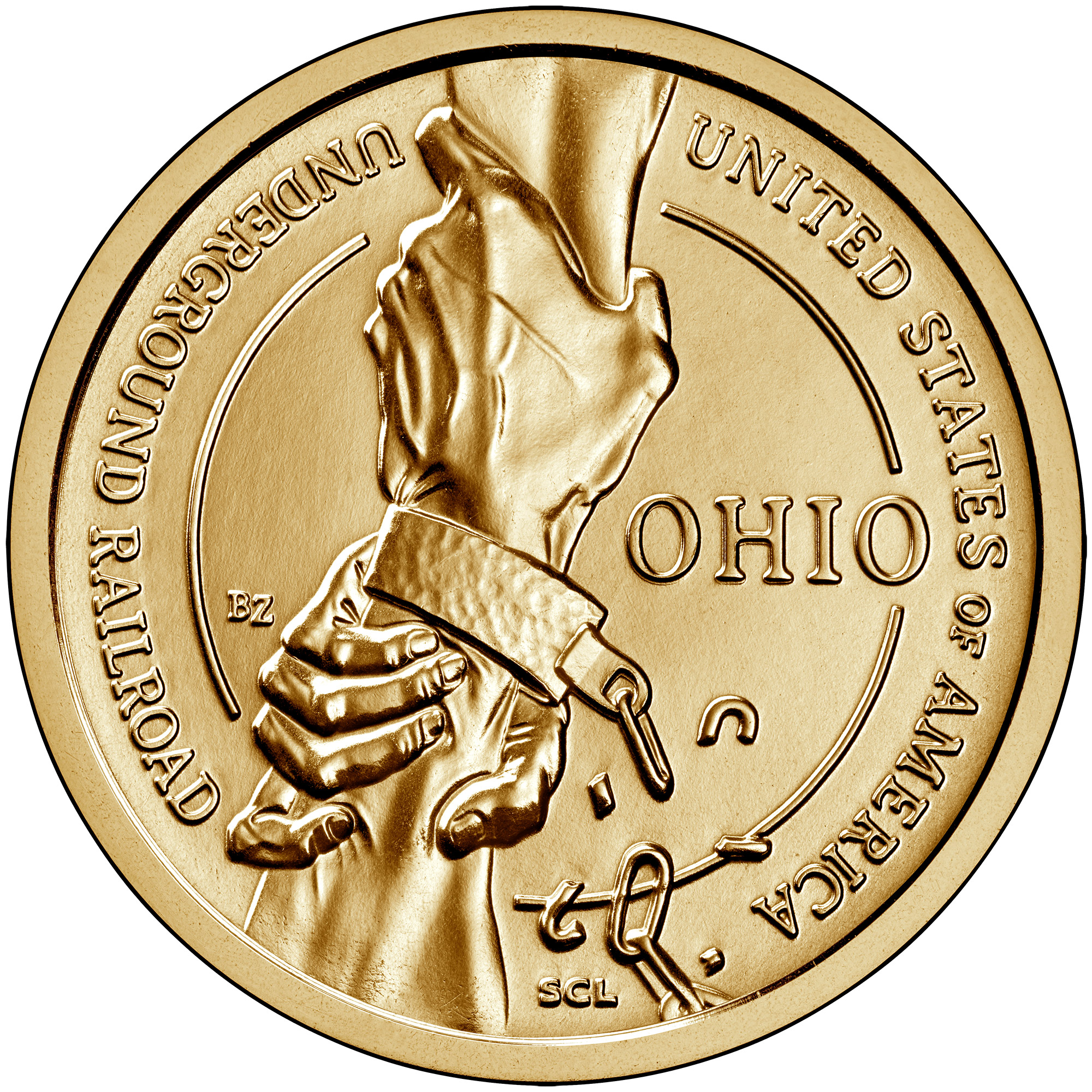 WASHINGTON – Rolls and bags containing the first American Innovation $1 Coin of 2023 will go on sale January 30 at noon EST. The reverse (tails) design of the coins in these products honors innovation from the State of Ohio. The following packaging options from the United States Mint (Mint) facilities at Philadelphia and Denver will be available:

Orders are limited to 10 items of each product per household.

Introduced in 2018 and authorized by Public Law 115-197, the American Innovation $1 Coin Program is a multi-year series featuring distinctive reverse designs that pay homage to America’s ingenuity and celebrate the pioneering efforts of individuals or groups from all 50 states, the District of Columbia, and the U.S. territories.

The 2023 American Innovation Ohio $1 Coin reverse design depicts two strong hands grasped together, the upper arm pulling the lower arm upward, representing the support and strength required by both parties on the Underground Railroad. A chain fastened to a rustic shackle around the lower arm’s wrist snaps and fragments, alluding to the hope of freedom. The inscriptions are “UNITED STATES OF AMERICA,” “UNDERGROUND RAILROAD,” and “OHIO.” The design was created by United States Mint Artistic Infusion Program (AIP) Designer Beth Zaiken and sculpted by United States Mint Medallic Artist Stephen Layne.

“Ohio is proud to have this part of our history on the new $1 dollar coin. Ohio had many stops on the Underground Railroad, and today, the National Underground Railroad Freedom Center near the banks of the Ohio River in Cincinnati tells the story of the flight to freedom,” said Governor Mike DeWine.

“The United States Mint is honored to showcase Ohio’s pivotal role in the Underground Railroad network,” said Mint Director Ventris C. Gibson. “The network of individuals, families, friends, and churches that covertly helped slaves escape to freedom was truly an innovation of human compassion and ingenuity.”

The obverse (heads) of all coins in this series features a dramatic representation of the Statue of Liberty in profile with the inscriptions “IN GOD WE TRUST” and “$1.” It also includes a privy mark of a stylized gear, representing industry and innovation. AIP Designer Justin Kunz created the design, which was sculpted by Mint Medallic Artist Phebe Hemphill.

American Innovation $1 Coins are included in the Mint’s Product Subscription Program. Structured like a magazine subscription, this program affords customers the convenience of signing up to receive automatic shipments of products in a series. The shipments continue until the subscription is cancelled. For details, visit https://catalog.usmint.gov/shop/subscriptions.

About the United States Mint
Congress created the United States Mint in 1792, and the Mint became part of the Department of the Treasury in 1873. As the Nation’s sole manufacturer of legal tender
coinage, the Mint is responsible for producing circulating coinage for the Nation to conduct its trade and commerce. The Mint also produces numismatic products, including proof, uncirculated, and commemorative coins; Congressional Gold Medals; silver and bronze medals; and silver and gold bullion coins. Its numismatic programs are self-sustaining and operate at no cost to taxpayers.

Please use the United States Mint catalog site at https://catalog.usmint.gov/ for all order placements or call 1-800-USA-MINT (872-6468).