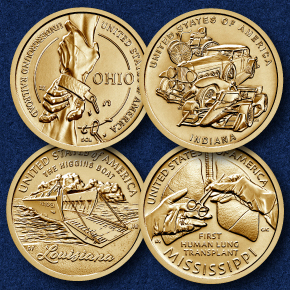 WASHINGTON – The United States Mint (Mint) today officially announced the designs for the 2023 American Innovation $1 Coin Program. This multi-year series that started in 2018 honors innovation and innovators by issuing $1 coins for each of the 50 states, the District of Columbia, and the five U.S. territories. The Mint works with the office of the Governor, or other Chief Executive for each state, territory, or city, along with subject matter experts, to determine design concepts emblematic of innovation that is significant and meaningful to its jurisdiction and/or its role in the Nation. Once the Secretary of the Treasury approves the design concepts, the designs are developed and reviewed. The Secretary of the Treasury selects the final design for each coin. The 2023 designs honor innovations and/or innovators from Ohio, Louisiana, Indiana, and Mississippi.

The edge-incused inscriptions are “2023,” the mint mark, and “E PLURIBUS UNUM.”