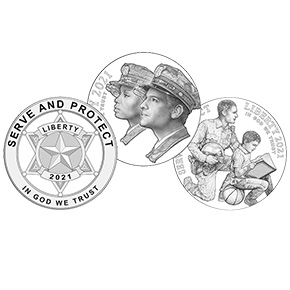 WASHINGTON– The United States Mint (Mint) Director David J. Ryder participated in a virtual design unveiling today for the 2021 National Law Enforcement Memorial and Museum Commemorative Coin Program. The designs will be featured on a gold coin, a silver coin, and a half dollar as authorized by Public Law 116-94 (Division K). All obverse (heads) and reverse (tails) designs were created by United States Mint Artistic Infusion Program Designers and sculpted by United States Mint Medallic Artists.

Silver Coin Obverse
Designer: Frank Morris
Medallic Artist: Phebe Hemphill
The design depicts a police officer kneeling next to a child, who is reading a book and sitting on a basketball, symbolizing service to the community and future generations. Inscriptions are “SERVE & PROTECT,” “LIBERTY,” “2021,” and “IN GOD WE TRUST.”

Silver Coin Reverse
Designer: Ron Sanders
Medallic Artist: John P. McGraw
The design depicts a handshake between a law enforcement officer and a member of the public, representing the work law enforcement officers do within their communities to increase safety through trusting relationships. Inscriptions are “UNITED STATES OF AMERICA,” “E PLURIBUS UNUM,” and “ONE DOLLAR.”

Half Dollar Coin Obverse
Designer: Ron Sanders
Medallic Artist: John P. McGraw
The design depicts a sheriff’s star, representing the community served by law enforcement officers and the important role they play. Inscriptions are “SERVE AND PROTECT,” “LIBERTY,” “2021,” and “IN GOD WE TRUST.”

Half Dollar Coin Reverse
Designer: Heidi Wastweet
Medallic Artist: Renata Gordon
The design depicts an eye in a magnifying glass looking at a fingerprint, portraying the human side of justice, a reminder that law enforcement is not only officers on the street but also many others behind the scenes. It also features the emblem of the National Law Enforcement Museum. Inscriptions are “UNITED STATES of AMERICA,” “E PLURIBUS UNUM,” “HALF DOLLAR,” and “NATIONAL LAW ENFORCEMENT MEMORIAL AND MUSEUM.”

Mint Director Ryder, whose responsibilities include oversight of the United States Mint Police, one of the oldest Federal law enforcement agencies, said: “These designs will be featured on coins that honor the extraordinary service and sacrifice of law enforcement officers throughout the history of the United States. We hope this program will assist the Museum in its mission to bridge the past and the present and to increase public understanding and support for the law enforcement community.”

The on-sale date for products in the National Law Enforcement Memorial and Museum Commemorative Coin Program will be published on the Mint’s Product Schedule here. When available, the Mint will accept orders at https://catalog.usmint.gov/.