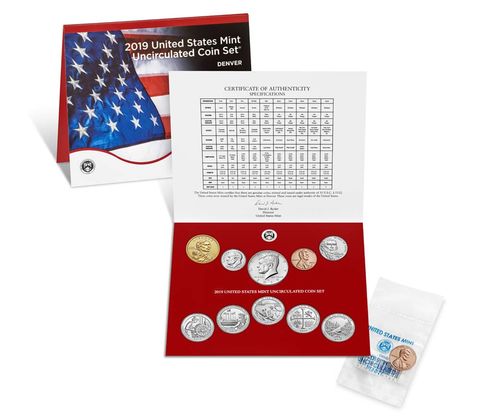 • Five America the Beautiful Quarters® Program coins honoring Lowell National Historical Park (Massachusetts), American Memorial Park (Commonwealth of the Northern Mariana Islands), War in the Pacific National Historical Park (Guam), San Antonio Missions National Historical Park (Texas), and Frank Church River of No Return Wilderness (Idaho).
• One Native American $1 Coin with a reverse design depicting Mary Golda Ross writing calculations. Behind her, an Atlas-Agena rocket launches into space, with an equation inscribed in its cloud. An astronaut, symbolic of Native American astronauts, including John Herrington, spacewalks above. In the field behind, a group of stars indicates outer space. Inscriptions are “UNITED STATES OF AMERICA” and “$1.” The obverse design (heads) retains the central figure Sacagawea carrying her infant son, Jean Baptiste. The inscriptions are “LIBERTY” and “IN GOD WE TRUST.”
• One Kennedy half dollar
• One Roosevelt dime
• One Jefferson nickel
• One Lincoln penny

The United States Mint strikes its uncirculated coins on dedicated presses that use greater force than those used to produce circulating coins. This technique results in a sharp, intricately detailed image. A blister secures the coins in a folder.

This year’s set includes an additional 2019 Lincoln penny with an uncirculated finish and a “W” mint mark. This special coin is packaged separately in clear United States Mint plastic wrap.

The United States Mint Uncirculated Coin Set is also available for purchase through the Product Enrollment Program. Visit http://catalog.usmint.gov/customer-service/faqs/ for information about this convenient order option.