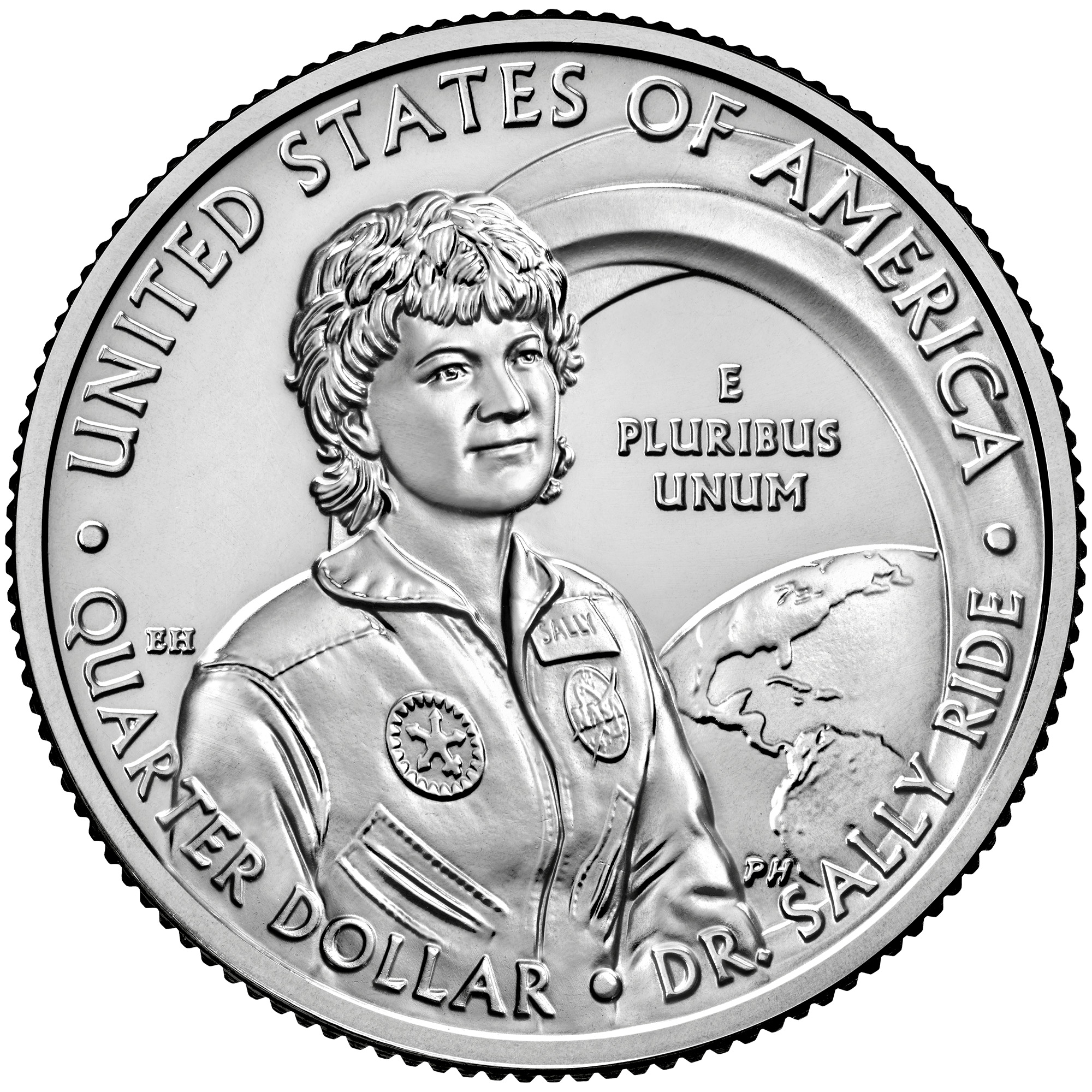 “Dr. Sally Ride captured the Nation’s imagination as a symbol of the ability of women to shatter barriers. Heralding her accomplishments via this beautiful quarter provides the Mint with yet another opportunity to connect America through coins,” said Mint Deputy Director Ventris C. Gibson. “The historic four-year AWQ program celebrates the breadth and depth of accomplishments of American women throughout our Nation’s history.”

Dr. Ride was a physicist, pioneer in space exploration, and leader in science education. The first American woman to soar into space, Dr. Ride’s historic flight represented just one aspect of a remarkable and multi-faceted life. She was also an athlete, science writer, and professor. Dr. Ride graduated from Stanford University with a double major in physics and English. At the time, she was one of only a select group of women majoring in physics. She continued at Stanford and was completing her Ph.D. in physics when she read in the student newspaper that NASA was looking for new astronauts, and for the first time, women could apply. When she blasted off aboard space shuttle Challenger on June 18, 1983, Ride became the first American woman—and, at 32, the youngest American—in space. During the six days of mission STS-7, she deployed and retrieved a satellite with the shuttle’s robotic arm.

The reverse (tails) design depicts Dr. Ride next to a window on the space shuttle, inspired by her quote, “But when I wasn’t working, I was usually at a window looking down at Earth.” It was designed by United States Mint Artistic Infusion Program (AIP) Artist Elana Hagler and sculpted by United States Mint Medallic Artist Phebe Hemphill. The inscription “E PLURIBUS UNUM” is intentionally positioned over the Earth next to the U.S., indicating that Dr. Ride was the first American woman in space. Additional inscriptions are “UNITED STATES OF AMERICA,” “QUARTER DOLLAR,” and “DR. SALLY RIDE.”

The obverse (heads) depicts a portrait of George Washington originally composed and sculpted by Laura Gardin Fraser to mark George Washington’s 200th birthday.  Though her work was a recommended design for the 1932 quarter, then-Treasury Secretary Mellon ultimately selected the familiar John Flanagan design. Of Fraser, Deputy Director Gibson said, “I am proud that the new obverse design of George Washington is by one of the most prolific female sculptors of the early 20th century. Laura Gardin Fraser was the first woman to design a U.S. coin, and her work is lauded in both numismatic and artistic circles. Ninety years after she intended for it to do so, her obverse design will fittingly take its place on the quarter.”

The obverse design is common to all quarters issued in the series. Inscriptions are “LIBERTY,” “IN GOD WE TRUST,” and “2022.”

Authorized by Public Law 116-330, the American Women Quarters Program features coins with reverse (tails) designs emblematic of the accomplishments and contributions of American women. Beginning in 2022 and continuing through 2025, the Mint will issue five quarters in each of these years. The ethnically, racially, and geographically diverse group of individuals honored through this program reflects a wide range of accomplishments and fields, including suffrage, civil rights, abolition, government, humanities, science, space, and the arts. The additional honorees in 2022 are Maya Angelou, celebrated writer, performer, and social activist; Wilma Mankiller, the first female principal chief of the Cherokee Nation and an activist for Native American and women’s rights; Nina Otero-Warren, a leader in New Mexico’s suffrage movement and the first female superintendent of Santa Fe public schools; and Anna May Wong, the first Chinese American film star in Hollywood, who achieved international success despite racism and discrimination.

“Sally would be so moved by this great honor. It’s especially fitting that it comes during the 20th anniversary celebration for Sally Ride Science,” said Tam O’Shaughnessy, Dr. Sally Ride’s life partner and co-founder and Executive Director of Sally Ride Science at UC San Diego. “This tribute reflects Sally’s legacy not only as a trailblazing astronaut but also as a champion of diversity and inclusion in STEM fields.”