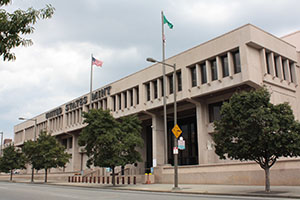 PHILADELPHIA – The United States Mint (Mint) marked a historic milestone today: the 50th anniversary of its fourth and current minting facility in Philadelphia, PA. In celebration of this milestone, on August 14, visitors will have a rare opportunity to speak directly with Mint personnel who make our nation’s coins. The original “five-handed” shovel used for the ground breaking the fourth Philadelphia Mint will also be on display.

“We have come a long way from our modest beginning in 1792,” said Mint Director David Ryder. “In those days, it took three years to produce our nation’s first one million coins. Today, the current Philadelphia Mint is a state-of-the art facility equipped with the technology to produce one million coins every 30 minutes.”

The fourth Philadelphia Mint opened on Aug. 14, 1969. Its location at Independence Mall East is a few hundred yards from the site of the first Mint building. With approximately 426 employees, the fourth Philadelphia facility is the world’s largest mint in both size and production, covering more than five acres of ground with more than 500,000 square feet of administrative, production and public space.

The Philadelphia Mint produces more than 35 million coins each day. In addition to manufacturing coins for general circulation, the Philadelphia Mint also produces numismatic products including annual uncirculated coin sets, congressionally authorized commemorative coins, and medals. Most new coins and medals are designed in Philadelphia by the Mint’s sculptor-engravers and medallic artists.

More than 50,000 dies are produced each year at the Philadelphia Mint. Dies are the round cylinders of hardened tool steel with a negative impression of the coin design. They are used to strike blank metallic disks that eventually leave the facility as coins.

The Philadelphia Mint produces Congressional Gold Medals, the highest civilian honor the nation bestows. Authorized by Congress, a single gold medal is struck and presented to commemorate significant historical events of the nation or to honor those persons whose superior deeds and achievements have enriched our history or the world. Many of the medals are available as bronze duplicates and miniature bronze replicas.

Philadelphia Mint Superintendent Robert Kurzyna stated: “Over the last 50 years, advances in technology, automation and safety have increased production capacity to 50 million coins per day. But just as in 1792, it’s the people who make our nation’s coins that make the difference. They are dedicated, bright and hardworking and they are proud to make the highest quality coins in the world. We look forward to our next 50 years on Independence Mall, efficiently and safely producing our nation’s coinage.”

The Coinage Act of April 2, 1972, established the United States Mint. Congress chose Philadelphia, then the nation’s capital, as the site of the new facility. Two lots were purchased at 7th and Arch Streets to construct a three-story building, the tallest building in Philadelphia at that time. It was the first structure built by the government for use by the government. A plaque now marks the spot.

As coin production increased and technology continued to improve, the Mint relocated to two subsequent locations in Philadelphia: Chesnut and Juniper Streets (1833), where the first steam press was installed in 1836; and then to Spring Garden Street (1901), a $2 million site and building that included seven Tiffany glass mosaics. The mosaics were re-installed in the fourth Philadelphia Mint in 1971.

Now located in Philadelphia’s Historic District, the Philadelphia Mint offers free, self-guided tours. Tour attractions include a view of the actual coining operations from 40 feet above the factory floor, historic artifices, and exhibits. Information about the tours is available here.

Bronze medals commemorating the official opening of the fourth Philadelphia Mint are available for purchase online at catalog.usmint.gov/ and at 1-800-USA-MINT (872-6468).

About the United States Mint
Congress created the United States Mint in 1792 and the Mint became part of the Department of the Treasury in 1873. As the Nation’s sole manufacturer of legal tender coinage, the Mint is responsible for producing circulating coinage for the Nation to conduct its trade and commerce. The Mint also produces: numismatic products, including proof, uncirculated, and commemorative coins; Congressional Gold Medals; silver and bronze medals, and silver and gold bullion coins. Its numismatic programs are self-sustaining and operate at no cost to taxpayers.