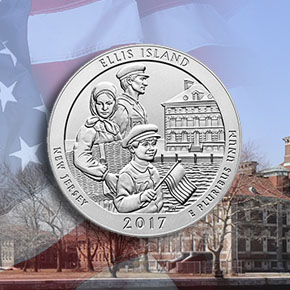 Priced at $9.95, this set contains two uncirculated Ellis Island quarters—one from the Philadelphia Mint and one from the Denver Mint—and one proof quarter from the San Francisco Mint. The coins are held in a durable plastic card featuring an image of Ellis Island. A Certificate of Authenticity is printed on the back of the card.

The reverse (tails) of the quarters depict an immigrant family approaching Ellis Island with a mixture of hope and uncertainty. The hospital building is visible in the background. Inscriptions are “ELLIS ISLAND,” “NEW JERSEY,” 2017,” and “E PLURIBUS UNUM.” The obverse (heads) design features the 1932 portrait of George Washington by John Flanagan.