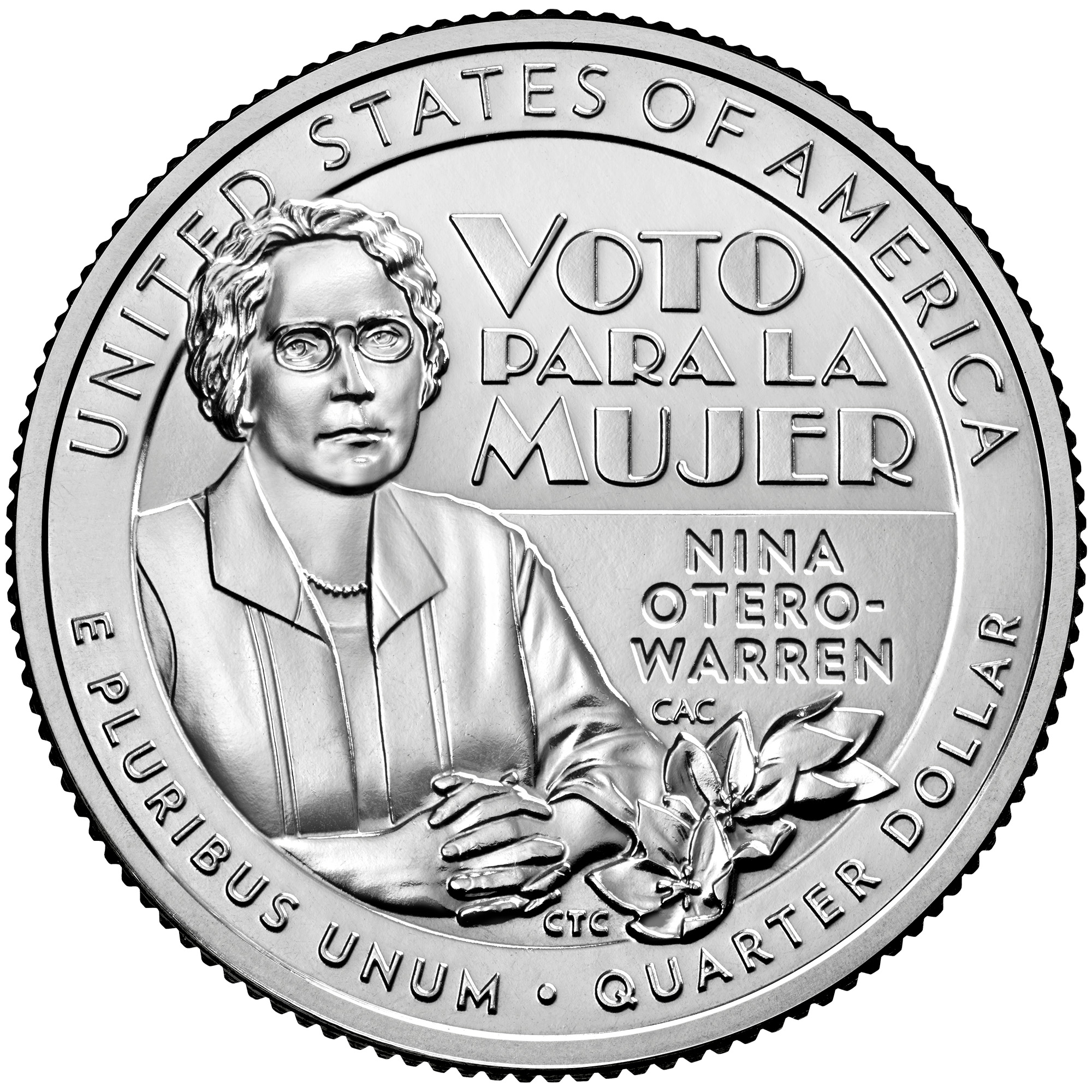 WASHINGTON – The United States Mint (Mint) will begin shipping the fourth coin in the American Women Quarters (AWQ) Program on August 15. These circulating quarters honoring Nina Otero-Warren are manufactured at the Mint facilities in Philadelphia and Denver. Coins featuring remaining AWQ honorees will begin shipping later this year and through 2025.

“The fourth coin in our American Women Quarters Program honors Nina Otero-Warren, a courageous advocate for women, children, and Hispanic and Native American communities,” said Mint Director Ventris C. Gibson. “This quarter is designed to reflect the breadth and depth of accomplishments by Nina Otero-Warren who overcame challenges and obstacles she faced during her lifetime.”

As a leader in the suffrage movement, Otero-Warren emphasized the necessity of using the Spanish language to reach Hispanic women. She was also the first female superintendent of Santa Fe, New Mexico public schools. Her remarkable accomplishments include convincing predominantly male power brokers to support changes in favor of New Mexican women; advocating for passage of the 19th Amendment; and advocating for children by raising standards for New Mexico public schools.

The obverse (heads) depicts a portrait of George Washington originally composed and sculpted by Laura Gardin Fraser to mark George Washington’s 200th birthday.  Though her work was a recommended design for the 1932 quarter, then-Treasury Secretary Mellon ultimately selected the familiar John Flanagan design. Of Fraser, Director Gibson said, “I am proud that the new obverse design of George Washington is by one of the most prolific female sculptors of the early 20th century. Laura Gardin Fraser’s work is lauded in both numismatic and artistic circles. Ninety years after she intended for it to do so, her obverse design has fittingly taken its place on the quarter.”

Authorized by Public Law 116-330, the American Women Quarters Program features coins with reverse (tails) designs emblematic of the accomplishments and contributions of American women. Begun in 2022 and continuing through 2025, the Mint is issuing five quarters in each of these years. The ethnically, racially, and geographically diverse group of individuals honored through this program reflects a wide range of accomplishments and fields, including suffrage, civil rights, abolition, government, humanities, science, space, and the arts. The fifth and final honoree in 2022 is Anna May Wong, the first Chinese American film star in Hollywood, who achieved international success despite racism and discrimination.

“This quarter dollar design composes a portrait of Nina Otero-Warren, a powerful inscription, and a cluster of Yucca blossoms, the State flower of New Mexico,” said AIP Designer Chris Costello. “It recognizes Otero-Warren’s influence as a New Mexico politician, educator, and women’s suffragist in support of the ratification of the 19th Amendment. The inscription “VOTO PARA LA MUJER” (Votes for Women) is a nod to Warren’s belief that the use of Spanish was critical in the New Mexico suffrage movement. The Art Deco typography reflects America’s progressive mood during the early 20th century. The portrait conveys Otero-Warren’s quiet confidence, patience, and determination while advancing her human rights agenda as a Spanish American woman in spite of the prevailing barriers confronting women in America. The design immortalizes a very courageous woman and is meant to inspire and inform all Americans of her impact on the Nation.”