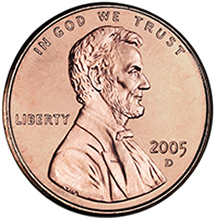 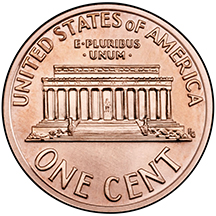 The “Lincoln Memorial” penny design was introduced in 1959. This design was last made in 2008 and replaced by the Lincoln Bicentennial One Cent Program.

The obverse design featuring President Abraham Lincoln was first produced in 1909 to commemorate the 100th anniversary of Lincoln’s birth.

The reverse image of the Lincoln Memorial was selected to commemorate the 150th anniversary of Lincoln’s birth. It replaced the Wheat Ears design that appeared on the reverse of the 1909 Lincoln cent.

Obverse (heads): Features the image of President Abraham Lincoln used on the penny since 1909.