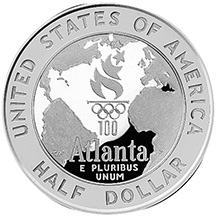 The U.S. Olympic Basketball Half Dollar was released in 1995 to support the 1996 Atlanta Centennial Olympic Games and the programs of the United States Olympic Committee.

The obverse features a design of three men playing basketball.

The reverse features the Atlanta Committee for the Olympic Games Mark juxtaposed over a globe that represents the nearly 200 nations of the world that came together for the 1996 Centennial Olympic Games.