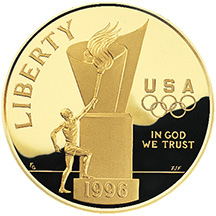 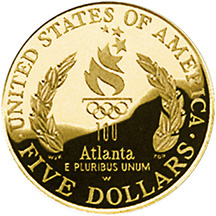 The U.S. Olympic Cauldron Five Dollar coin was released in 1996 to support the Atlanta Centennial Olympic Games and the programs of the United States Olympic Committee.

The obverse features a design that highlights the lighting of the Olympic flame.

The reverse features the mark of the Atlanta Committee for the Olympic Games, encompassed by representations of the laurel wreath that was awarded to Greek athletes during the ancient Olympic Games.