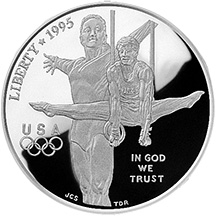 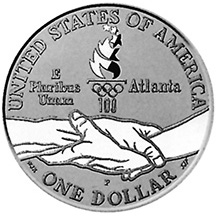 The U.S. Olympic Gymnastics Silver Dollar was released in 1995 to support the 1996 Atlanta Centennial Olympic Games and the programs of the United States Olympic Committee.

This coin is frosted with a polished design.

The reverse features a silhouette outlined design of the Olympic logo and clasped hands, to symbolize the brotherhood and team spirit of the Olympic Games.