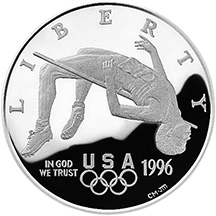 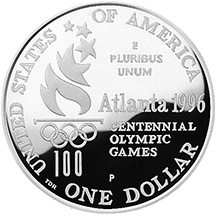 The U.S. Olympic High Jump Silver Dollar was released in 1996 to support the Atlanta Centennial Olympic Games and the programs of the United States Olympic Committee. It features a design of an athlete during the Fosbury Flop which is a high jumping technique introduced by Dick Fosbury at the 1968 Olympic Games.

The reverse features the mark of the Atlanta Committee for the Olympic Games which is positioned to the left of the design, a torch and flame, and the words Atlanta 1996.