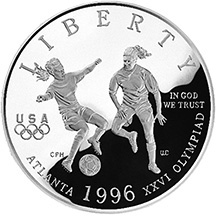 Released in 1996 to support the 1996 Atlanta Centennial Olympic Games and the programs of the United States Olympic Committee, the U.S. Olympic Soccer Half Dollar features women’s soccer which became an official part of the Olympic Games in 1996.

The obverse features a design of women playing soccer.