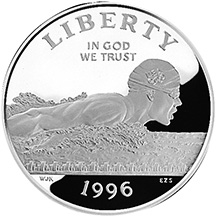 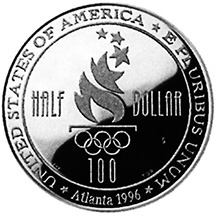 Released in 1996 to support the 1996 Atlanta Centennial Olympic Games and the programs of the United States Olympic Committee, the U.S. Olympic Swimming Half Dollar features a male swimmer.

The obverse features a design of a male athlete competing in a swimming event.