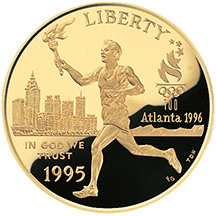 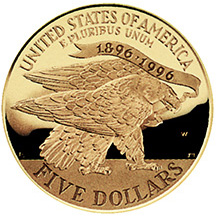 The U.S. Olympic Torch Runner Five Dollar Gold was released in 1995 to support the 1996 Atlanta Centennial Olympic Games and the programs of the United States Olympic Committee.

The obverse features a design of a torch runner carrying the torch to the cauldron, the Olympic Games logo, and the Atlanta skyline in the background.

The reverse features a side view of the bald eagle, with a banner in its beak.