The world eagerly watched on July 20, 1969, as Neil Armstrong and Edwin “Buzz” E. Aldrin, Jr. took mankind’s first steps on the Moon. This unprecedented engineering, scientific, and political achievement was the culmination of the efforts of an estimated 400,000 Americans and secured our Nation’s leadership in space for generations to come. The Apollo 11 crew—Armstrong, Aldrin, and Michael Collins—safely returned to Earth on July 24, 1969, fulfilling the national goal set in 1961 by President John F. Kennedy. Nearly half a century later, the United States is the only country ever to have attempted and succeeded in landing humans on a celestial body other than Earth and safely returning them home.

In recognition of the 50th anniversary of the first manned landing on the Moon, Public Law 114-282 authorizes a four-coin program: a curved $5 gold coin, a curved $1 silver coin, a curved half-dollar clad coin, and a curved 5 ounce $1 silver proof coin.

As required by the Public Law, the Mint invited American artists to design a common obverse image that is emblematic of the United States Space Program leading up to the first manned Moon landing. The Secretary of the Treasury selected the design from a juried competition. Gary Cooper of Belfast, Maine, created the winning design in the Apollo 11 Commemorative Coin Design Competition. 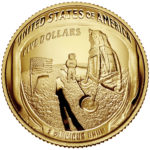 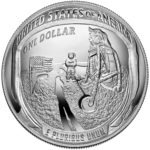 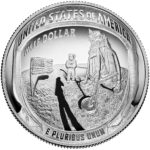 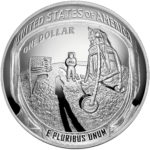 Prices for the coins include surcharges of $35 for each gold coin, $10 for each silver coin, $5 for each half dollar clad coin and $50 for each five ounce proof silver dollar coin, which the law authorizes to be paid as follows:

In honor of the upcoming Apollo 11 50th Anniversary coin collection, we’re launching a new game on the U.S. Mint Kids site, Space Supply. In this game you will deliver critical supplies to the Space Colonies across our solar system while dodging space debris, asteroids, and UFOs.

Did you know that there are coins currently in outer space? Two of our state quarters, Maryland and Florida, are on NASA’s New Horizons mission exploring Pluto, its moons, and the Kuiper Belt – the farthest spacecraft flyby in history.

The gallery below features coins and medals related to space. 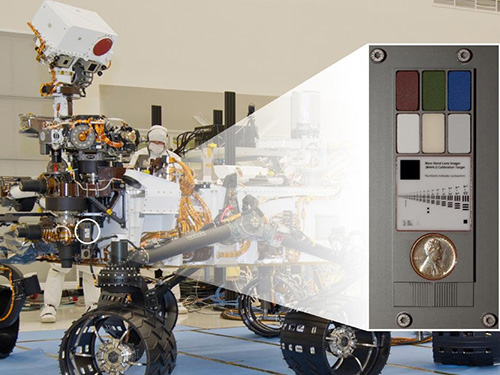