By Office of Corporate Communications
February 24, 2022 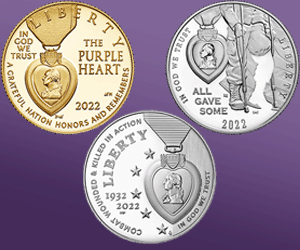 United States Mint Police Officer and former U.S. Army Ranger Brett Paige earned a Purple Heart in 2012 after being seriously wounded during combat operations in Afghanistan. This year, the Mint will produce and sell commemorative coins for an organization whose mission is to pay tribute to Purple Heart recipients, and educate Americans about combat-wounded veterans, such as Paige.

On May 17, 2012 during his second tour of duty in Afghanistan with the 82nd Airborne, Paige was wounded in the Kandahar province by an improvised explosive device, sustaining substantial shrapnel damage to his face and body. He was medevacked for emergency surgery, and was then transferred to Walter Reed National Naval Medical Center in Bethesda, Maryland.

After undergoing multiple facial surgeries and treatments for traumatic brain injury, he retired from the Army in 2015. His government service includes an internship with the Pentagon Force Protection Agency and the Defense Logistics Agency. He joined the U.S. Mint Police at the San Francisco Mint in 2020.

Paige is a native Californian who grew up in Manteca; he worked as a nursing assistant at Doctor’s Hospital there after graduating from Sierra High School in 2007. In 2009, he joined the Army as an infantryman, successfully passing the Airborne and the Ranger Assessment Selection Program (RASP) and deployed to Afghanistan.

The Purple Heart’s history reaches back to the American Revolution. In 1782, General George Washington gave orders establishing the Badge of Military Merit to honor merit among soldiers in the Continental Army. Washington stated that the award was to be a permanent one, but once the Revolution ended, it was all but forgotten until the 20th century. General John J. “Blackjack” Pershing suggested a need for a merit award in 1918, but it wasn’t until 1932 that the modern Purple Heart was created in recognition of Washington’s ideals and for the bicentennial of his birth.