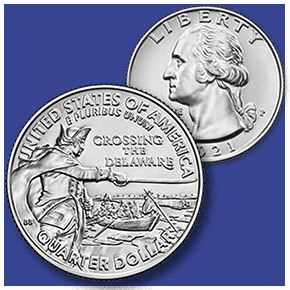 WASHINGTON–On this night in 1776, General George Washington, along with 2,400 troops and artillery, began his historic crossing of the Delaware River in preparation for a surprise attack on British and Hessian soldiers during the American Revolutionary War. Today, the United States Mint (Mint) is unveiling a new design depicting this pivotal moment in history which will be displayed on the reverse (tails) of the quarter-dollar coin beginning in 2021. The design will begin circulating following the issuance of the final coin in the America the Beautiful Quarters® Program.

The new design depicts General Washington commanding his troops through the overnight crossing of the ice-choked Delaware River prior to the Battle of Trenton during the American Revolutionary War. Inscriptions are “UNITED STATES OF AMERICA,” “E PLURIBUS UNUM,” “CROSSING THE DELAWARE,” and “QUARTER DOLLAR.” Artistic Infusion Program Designer Benjamin Sowards created the design which was sculpted by Medallic Artist Michael Gaudioso.

In accordance with the authorizing legislation, the obverse (heads) of the quarter dollar will revert to renowned designer John Flanagan’s design featuring President Washington that appeared on the coin before the 50 State Quarters Program.

Washington Crossing the Delaware quarters will be released into circulation by the Federal Reserve Banks on April 5, 2021.

Congress created the United States Mint in 1792 and the Mint became part of the Department of the Treasury in 1873. As the Nation’s sole manufacturer of legal tender coinage, the Mint is responsible for producing circulating coinage for the Nation to conduct its trade and commerce. The Mint also produces numismatic products, including proof, uncirculated, and commemorative coins; Congressional Gold Medals; silver and bronze medals, and silver and gold bullion coins. Its numismatic programs are self-sustaining and operate at no cost to taxpayers.