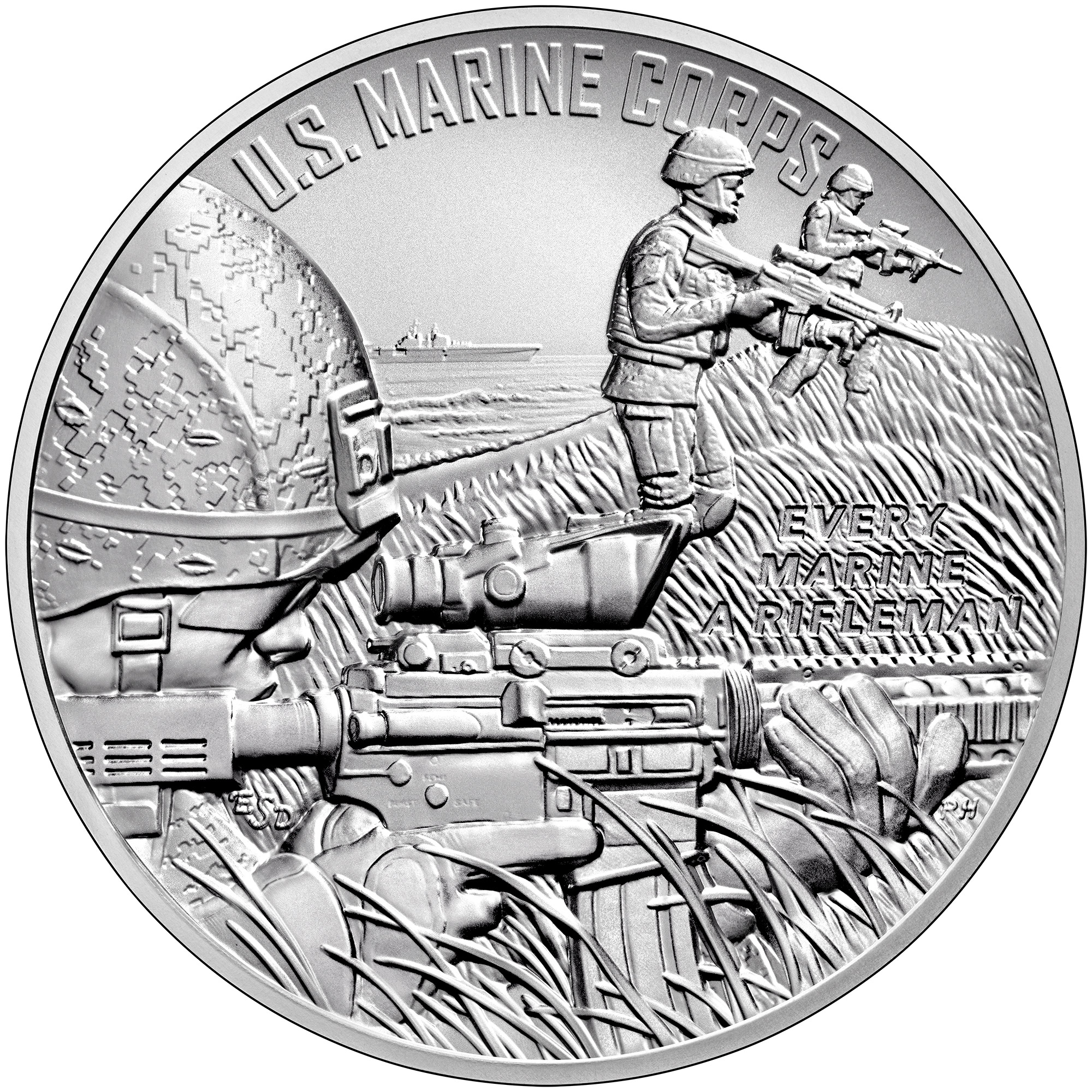 WASHINGTON – The United States Mint (Mint) will open sales for the fourth release in its U.S. Armed Forces Silver Medals Program on July 15, 2022, at noon ET. The latest 2.5 inch medal in the series honors the U.S. Marine Corps.

Designs featured on this medal are emblematic of the history and mission of the U.S. Marine Corps. The obverse (heads) depicts three Marines with M4 rifles moving ashore just after an amphibious landing. In the foreground, one of the Marines lies hidden in the grass, providing cover for the other two about to crest the hill, while a U.S. warship is seen in the distance. Inscriptions are “U.S. MARINE CORPS” and “EVERY MARINE A RIFLEMAN.”

The reverse (tails) depicts the familiar Marine Corps Eagle, Globe, and Anchor emblem encircled by a rope border. Its core values, “HONOR,” “COURAGE,” and “COMMITMENT,” and the Marine Corps motto “SEMPER FIDELIS” (Always Faithful) are inscribed around the outer border.

Medals in the Armed Forces Silver Medals Program are struck in 99.9 percent fine silver. Each is encapsulated and packaged in a presentation case and accompanied by a certificate of authenticity.

The 2.5 inch U.S. Marine Corps Silver Medal is priced at $160. To set up a REMIND ME alert for this product (item number: S22MD), visit https://catalog.usmint.gov/u.s.-marine-corps-2.5-ounce-silver-medal-S22MD.html. Production is limited to 10,000 units, with orders limited to one per household.

About the United States Mint
Congress created the Mint in 1792, and it became part of the Department of the Treasury in 1873. As the Nation’s sole manufacturer of legal tender coinage, it is responsible for producing circulating coinage for the Nation to conduct its trade and commerce. The Mint also produces numismatic products, including proof, uncirculated, and commemorative coins; Congressional Gold Medals; silver and bronze medals; and silver and gold bullion coins. Its numismatic programs are self-sustaining and operate at no cost to taxpayers.

Note: To ensure that all members of the public have fair and equal access to its products, the Mint will not accept and will not honor orders placed prior to the official on-sale date and time of July 15, 2022, at noon ET.

Please use the catalog site https://catalog.usmint.gov/ as your primary source of the most current information on products and services, or call 1-800-USA-MINT (872-6468).