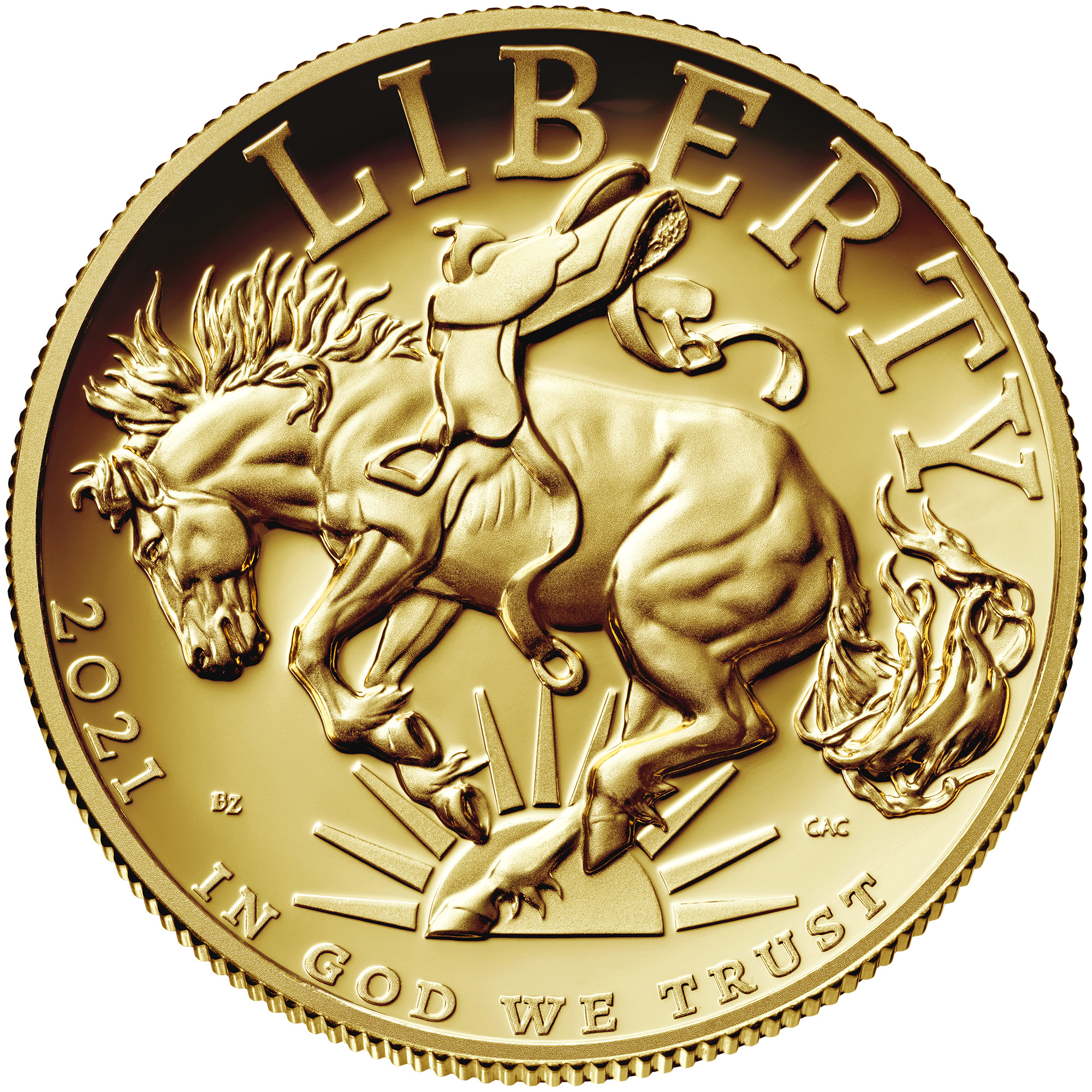 WASHINGTON – The United States Mint (Mint) will accept orders for the 2021 American Liberty High Relief Gold Coin™ beginning on August 19 at noon EDT. Each coin contains one ounce of 99.99 percent fine, 24-karat gold. Mintage is set at 12,500 coins, with orders limited to one per household for the first 24 hours of sales.

American Liberty High Relief Gold Coins are produced at the Mint’s West Point facility and display modern interpretations of the representation of American Liberty. In 2021, the obverse (heads) portrays Liberty as a wild American Mustang horse, bucking off a western style saddle, evoking the throwing off of the yoke of British rule during the American Revolution. The horse is centered on a rising sun. Inscriptions include “LIBERTY,” “IN GOD WE TRUST,” and “2021.” The design was created by United States Mint Artistic Infusion Program (AIP) Designer Beth Zaiken and sculpted by United States Mint Medallic Artist Craig A. Campbell.

The reverse (tails) depicts a close-up view of an eagle with an open beak, with the inscriptions “E PLURIBUS UNUM,” “1 OZ.,” “.9999 FINE GOLD,” “$100,” and “UNITED STATES OF AMERICA.” The design was created by AIP Designer Richard Masters and sculpted by Medallic Artist Phebe Hemphill.

Each coin is hand packaged in an exquisite, black presentation case accompanied by the Mint’s Certificate of Authenticity.

To set up a REMIND ME alert for this product, visit https://catalog.usmint.gov/american-liberty-one-ounce-gold-coin-21DA.html (product code 21DA).

Additional products in the American Liberty series are available at: https://catalog.usmint.gov/coin-programs/american-liberty/.

The American Liberty series also includes a corresponding .999 fine silver medal with the same design as the corresponding gold coin. The on-sale date for this medal will be announced later this year.

Note: To ensure that all members of the public have fair and equal access to United States Mint products, the United States Mint will not accept and will not honor orders placed prior to the official on-sale date and time of Aug. 19, 2021, at noon EDT.