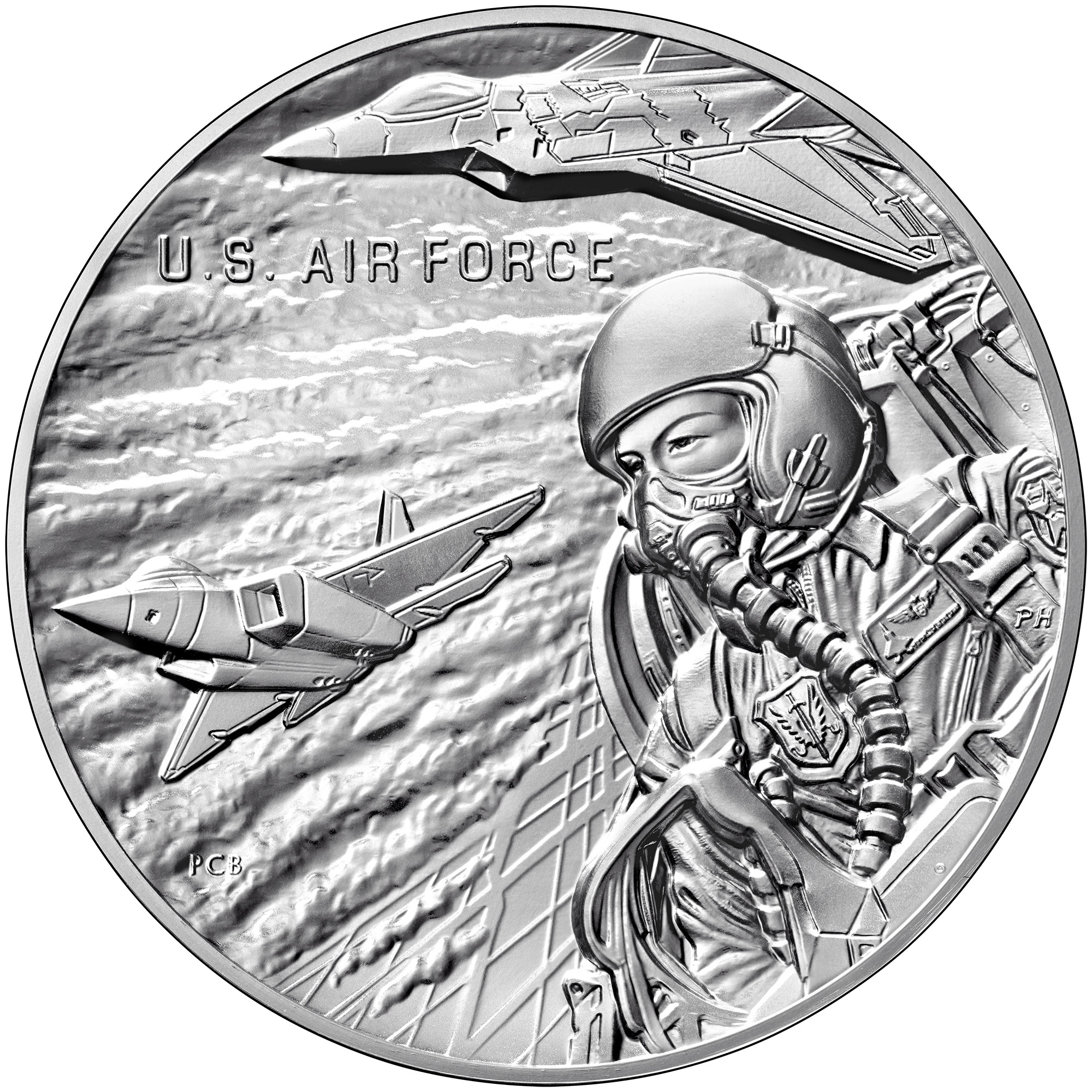 Designs featured on this medal are emblematic of the history and mission of the U.S. Air Force. The obverse (heads) depicts a fighter jet pilot, flying alongside F-22 fighter jets with a stylized landscape below. The inscription is “U.S. AIR FORCE.” United States Mint Artistic Infusion Program (AIP) Designer Paul C. Balan created the design, which was sculpted by United States Mint Medallic Artist Phebe Hemphill.

The reverse (tails) features a dynamic perspective of the three spires of the Air Force Memorial, with one of the spires piercing the border of the medal into the beyond. Surrounding the memorial are members of the U.S. Air Force Honor Guard in ceremonial assembly. The core values of the Air Force are inscribed around the border, with “INTEGRITY FIRST” in the top position, flanked by “SERVICE BEFORE SELF” on the left and “EXCELLENCE IN ALL WE DO” on the right. AIP Designer Jamie Franki created the design, which Ms. Hemphill also sculpted.

Medals in the Armed Forces Silver Medal Program weigh 2.5 ounces, are two inches in diameter, and are struck in 99.9 percent fine silver. Each medal is encapsulated and comes with the Mint’s Certificate of Authenticity.

The Air Force Silver Medal is priced at $160. To set up a REMIND ME alert for this product, visit https://catalog.usmint.gov/united-states-air-force-silver-medal-2.5-ounce-S20MA.html?cgid=null&q=silver%2520medals&navid=search#q=silver%2520medals&start=1 (product code S20MA). To view the Mint’s complete portfolio of medals, please visit https://catalog.usmint.gov/shop/medals/.

Anticipated future releases in the Armed Forces Silver Medal Program include medals honoring the Coast Guard, U.S. Navy, U.S. Marine Corps, and the U.S. Army. Bronze versions of the medals will be available in subsequent years.

Note: To ensure that all members of the public have fair and equal access to United States Mint products, the United States Mint will not accept and will not honor orders placed prior to the official on-sale date and time of July 13, 2021, at noon EDT.