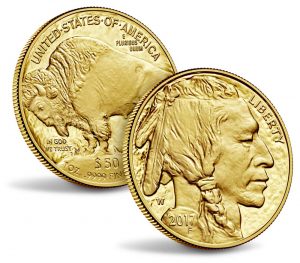 The coin recreates the popular “Indian Head” or “Buffalo” nickel, which was introduced in 1913 and produced until 1938. The design showcases the native beauty of the American West.

American Buffalo Gold Bullion Coins are the first .9999 fine 24-karat gold coins ever struck by the Mint. These $50 gold coins are available to members of the public seeking a simple and tangible way to own and invest in 24-karat gold in the form of legal tender coins whose content and purity is guaranteed by the U.S. government.

The United States Mint does not sell its bullion coins directly to the public. Instead, we distribute the coins through a network of official distributors called authorized purchasers.

The Mint also produces American Buffalo Gold Proof Coins for collectors. The term “proof” refers to a specialized minting process that begins by manually feeding burnished coin blanks into presses fitted with special dies. Each coin is struck multiple times so the softly frosted and highly detailed images seem to float above the field.

An official Certificate of Authenticity accompanies each coin. American Buffalo Gold Proof Coins sell at a fixed price and can be purchased directly from the United States Mint.