The American Legion was founded March 15, 1919, in Paris, France, out of concern for the welfare of soldiers and the communities they returned to in the United States after World War I. The non-partisan organization is the nation’s largest veterans group, with nearly two million members in more than 12,000 posts throughout the United States. Membership is open to men and women alike, regardless of ethnic background or religious affiliation.

The Legion focuses its efforts in four areas: Veterans Affairs and Rehabilitation, Children and Youth, National Security, and Americanism. These areas are known as “the Four Pillars” of American Legion service. Throughout its years of service to the nation, it has been a catalyst for social change and it has recorded myriad accomplishments. The Legion’s advocacy on behalf of veterans has been instrumental in the passage of numerous legislation including the Servicemen’s Readjustment Act of 1944, better known as the GI Bill, and multiple legislation to advance government recognition and promote effective treatment of service-connected conditions.

The Legion has awarded millions of dollars in Child Welfare Foundation grants and college scholarships, and has implemented numerous programs and services to assist veterans, their families, and the community. 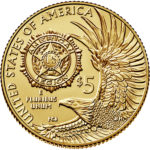 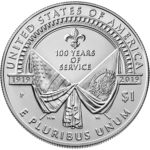 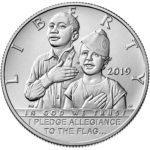 Coin prices include surcharges of $35 for each $5 gold coin, $10 for each silver dollar coin and $5 for each half dollar coin. The Public Law authorizes the Mint to pay the surcharges to The American Legion to support the Legion’s programs for veterans, members of the Armed Forces, and other purposes specified by the authorizing legislation.