In 2004 and 2005, the Jefferson nickel featured four different designs to commemorate the bicentennials of the Louisiana Purchase and the Lewis and Clark expedition. The images were evocative of the historic expedition into the Louisiana Territory. The series was authorized by Public Law 108-15.

The U.S. Mint began the Westward Journey Nickel Series in 2004 with the release of the “Peace Medal” and “Keelboat” nickels. In 2005, a new likeness of Thomas Jefferson appeared on the obverse in recognition of his role in the Louisiana Purchase and commissioning the Lewis and Clark expedition. The “American bison” reverse was representative of the wildlife encountered by the expedition. The second coin of 2005 depicted a scene of the Pacific Ocean, highlighting the expedition’s exultation on believing they had finally reached the Pacific Ocean after many months of travel.

In 2006, the nickel returned to its familiar depiction of Monticello on the reverse and an obverse with a portrait of Jefferson facing forward. 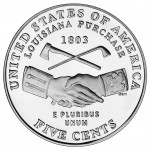 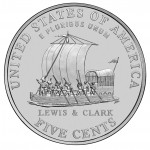 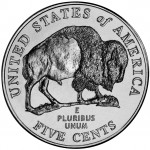 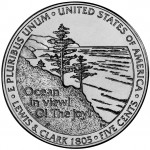