To purchase these coins, visit the U.S. Mint’s online catalog. To learn more about the coins, follow the links below.

On February 13, 1920, Andrew “Rube” Foster convened a meeting of eight independent African American baseball team owners in Kansas City, Missouri to address the problem of African American players being banned from the major leagues. The team owners formed the Negro National League, the first successful, organized professional African American baseball league in the United States. Additional leagues formed in eastern and southern states. The Negro Leagues operated until 1960. They changed not only the game of baseball, but also the United States.

The creation of the Negro Leagues provided a playing field for more than 2,600 African American and Hispanic baseball players to showcase their world-class baseball abilities. Their fast, aggressive style of play attracted black and white fans who sat together to watch those games at a time when it was virtually unheard of to interact socially in such a way. 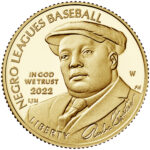 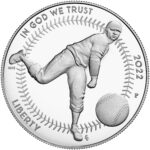 Coin prices include surcharges of $35 for each $5 gold coin, $10 for each silver dollar, and $5 for each clad half dollar. The Public Law authorizes the Mint to pay the surcharges to the Negro Leagues Baseball Museum for educational and outreach programs and exhibits.